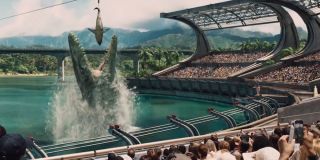 The new "Jurassic World" movie trailer features growling, grunting and shrieking dinosaurs. These bellows may make for good entertainment at theaters, but do paleontologists actually know how dinosaurs sounded?

"It is not easy to study dinosaur sounds," said Lindsay Zanno, an assistant research professor of paleontology at North Carolina State University. "Vertebrates usually vocalize with soft tissues, and soft tissues rarely preserve in the fossil record." (Human vocal cords are made of soft tissue.)

The modern descendants of the dinosaurs — birds and crocodiles — vocalize in vastly different ways. Birds make noise with their syrinx, a vocal organ in the trachea that has two branches. The branches can vibrate with different frequencies at the same time, allowing birds to "sing" two different notes simultaneously, according to Terry Gates, a paleontologist at the North Carolina Museum of Natural Sciences. [Album: Discovering a Duck-Billed Dino Baby]

"At some point, that had to evolve, and we don't know if it evolved only along the line of birds, or if it evolved before birds," which means it could have evolved in dinosaurs, Gates told Live Science.

In contrast, crocodiles can make growling rumbles even though they don't have vocal cords. Their young can even make noises before they hatch from their eggs, research shows.

So, besides the entertaining — but wildly speculative — dinosaur growls and roars in Hollywood, it's unclear how dinosaurs sounded, the researchers said.

"I think we can safely say that they made noises, but we can't say what they sounded like," said Mark Norell, the chair of paleontology at the American Museum of Natural History in New York City.

Some fossils offer clues about sounds made by crested duck-billed dinosaurs, which were large herbivores that lived during the Late Cretaceous period, between 85 million and 65 million years ago. These dinosaurs had hollow crests attached to their nasal passages that may have made unique sounds, Zanno said.

One duck-billed dinosaur, parasaurolophus, had a long tubular crest that started at its nose, went back over its head, and then returned to the nose. "You're looking at about seven feet of tubing before the molecule of air ever actually enters the head," Gates said.

Perhaps parasaurolophus used the crest as a resonating chamber for sound, "kind of like a trombone," he said.

Gates and his colleagues plan to study parasaurolophus sounds by taking CT scans of the dinosaur's skulls. The team hopes to construct a computer model with soft tissue inside the nasal crest and the nasal cavity, "because these soft-tissue structures are absolutely essential for creating noise," Gates said.

The research team will use vocalization models to try to figure out how the crest may have created sounds.

The work, however, has some critics. It's impossible to know how dinosaurs sounded without direct evidence about how the soft tissue functioned, researchers said.

"I consider that stuff to be really speculative and out there," Norell said. "I mean, there's really no way to tell."

Gates agreed, but also said, "I think that as long as you have a strong foundational background and you are very open in your published work, then I think it's fine to pursue such lines of inquiry."

Except for the work on duck-billed dinosaurs, dinosaur noise will likely remain a mystery. And though Hollywood may not be terribly scientific, it's fine as long as people realize it's largely entertainment, the researchers said.

"If they based it just on what we know [about] dinosaurs, it would be a pretty boring movie," Norell said. "We're learning more all of the time, but we can't reconstruct these animals and understand them in a way we understand living animals."