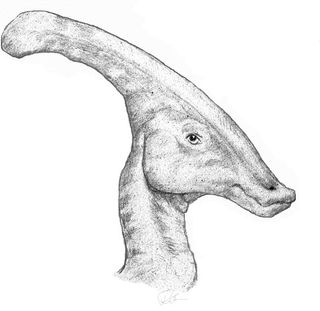 Drawing of a Parasaurolophus, a type of lambeosaur.
(Image: © Robert Buscombe)

The massive, hollow crests that protrude from atop the heads of duck-billed dinosaurs did not help their sense of smell, as previously believed.

The crests had a variety of shapes, resembling helmets, hatches and tubes.

In the past scientists proposed the crests worked as brain coolers, but most researchers agree that notion is unlikely. Scientists even once thought they were used as snorkels, an idea long ago discounted.

David Evans reconstructed the brain cavity of an herbivorous lambeosaur, also known as the "cows of the Cretaceous period," creating the first ever cast of the dino's brain, which was about the size of your fist.

Lambeosaurs roamed the planet from 85 million to 65 million years ago.

Evans, of the University of Toronto at Mississauga, found no indication that nerves from the brain ever curled up into the cavity, as one would expect if it was used to amplify smells.

Instead, these duck-billed dino-cows probably had an arrangement more similar to modern animals.

"It appears that the brain changed very little from their non-crested dinosaur ancestors, and that the primary region of the sense of smell was located right in front of the eyes—and coincidentally, that's where it is in birds, crocodiles, mammals, and basically all four-legged animals," Evans said.

Now that the "smell" theory has been set aside, several other popular theories for the crest's use are gaining steam.

One suggests they were used to resonate sounds, either to attract mates or ward off predators. Another posits they were visual displays useful for mate selection or species recognition, similar to feathers in peacocks or antlers on deer.

This research is detailed in the January issue of the journal Paleobiology.