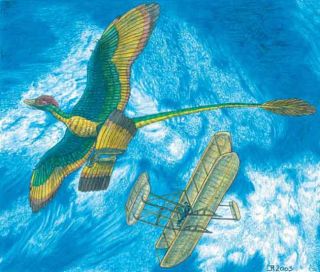 Like the Wright brothers, the first flying dinosaurs took to the air with two sets of wings.

New analysis of the winged Microraptor gui suggests that the first feathered dinos relied on a biplane-like wing configuration to swoop from tree to tree. The result may settle a century-old controversy over how the first feathered creatures achieved flight.

“It is intriguing to contemplate that perhaps avian flight, like aircraft evolution, went through a biplane stage before the monoplane was introduced,” said Sankar Chatterjee of Texas Tech University. “It seems likely that Microraptor invented the biplane 125 million years before the Wright 1903 Flyer.”

The chicken-sized Microraptor, which lived in the early Cretaceous period some 140 million years ago, had long flight feathers on its forelimbs and feet, the first time such an arrangement has been discovered. Flight feathers have a narrow leading edge and thick trailing edge, which helps create upward lift and streamlines the body in flight.

When Chinese paleontologists discovered and reconstructed the Microraptor, they assumed that it flapped its four wings in tandem like a dragonfly.

But when Chatterjee and his colleagues – who had previously used computer models to redefine the flight abilities of pterosaurs and another feathered dino, Archaeopteryx – inspected Microraptor’s skeleton, they quickly determined this wasn’t the case.

“The problem we faced is that the legs of Microraptor, like on any other dinosaur, could not be splayed sideways,” Chatterjee said.

Since they couldn’t extend their hind wing directly behind the front wing, Macerators probably held their feet lower than their arms, a more aerodynamically stable configuration, Chatterjee says. From the side, they would have looked like a staggered biplane.

After running this wing configuration through a computer simulation, the researchers determined that Microraptors got around like many small forest birds do today.

After reaching a high branch or tree top, it would hop off, diving head first until it picked up enough speed to create lift on its wings. Once it had lift, it could swoop upwards and land in the branches of another tree some 15 to 20 feet away.

Since it didn’t have to flap its wings to fly, this mode of transportation was very energetically efficient for the dino.

“It mainly glided, but probably had to flap a little during takeoff and landing, or in case of an emergency,” Chatterjee told LiveScience.

Microraptors were probably clumsy on the ground.

“Since they have these six-inch long feathers on their feet, they would have trouble running and would be vulnerable on the ground,” Chatterjee said, adding that they probably spent most of their time in trees.

This discovery helps settle the controversy over whether avian flight began in trees or on the ground. The “ground-up” theory says that the first feathered flyers got to the air by running, hopping, and flapping their wings furiously.

However, this new discovery and several others in China, support the “trees-down” theory where gravity was the main source of flying energy. The Chinese fossils, which are well preserved, show several transitional stages from wingless tree-dwellers, to winged gliders, to active flyers with large feathers designed to provide greater lift and thrust.

Chatterjee will present his findings Oct 16 at the annual meeting of the Geological Society of America.