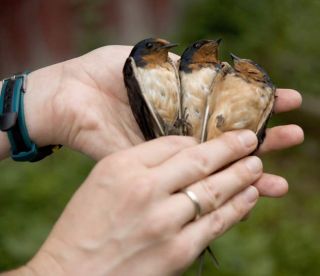 Among humans, conventional wisdom is that women pick men based on more than just looks. Not so with the female barn swallow.

She doesn't give a hoot about personality.

Male barn swallows have red breasts. A females likes them dark. If she mates with one and finds another with a darker breast, she'll bolt.

"For male swallows the mating game is never over," says Rebecca Safran, a Cornell University researcher who led a new study. "It is dynamic and continual. This is something that most humans can relate to -- think of how much time and money we spend on our looks and status long after we have established stable relationships."

The consequences in the avian world for this indiscreet behavior might sound familiar, too.

Half of all male barn swallows care for at least one little one that was fathered by a competitor. Some males raise an entire nest of illegitimate young.

But there's hope for those willing to get a makeover.

After birds laid eggs, Safran took the eggs so they'd mate again. Meanwhile, she used a red marker to darken some of the light-breasted males, turning them apparently into total hotties.

Those who'd gotten makeovers fathered a "substantially larger percentage of offspring" the second time around, according to DNA analysis. The unaltered males fared the same as before or worse.

"The study shows that the females are paying close attention to these signals and that they respond quickly to changes in their mate's appearance," Safran says.

The motivation may be a more-than-skin-deep lust, however.

Another recent study found that the trait that makes a male attractive -- in this case the redder breast, with other animals bigger horns or giant tusks -- serves to indicate overall suitability for reproduction.

The dark red breast of the barn swallow hints at a male's health, status or ability to raise young, Safran speculates.

"Factors like ultraviolet radiation from the Sun, soiling and even feather degrading bacteria are known to affect the color of bird feathers once they are grown, and perhaps the best males are those who spend more time preening and protecting their plumage," said Kevin McGraw, an assistant professor at Arizona State University who worked on the study while a graduate student at Cornell.

The research is detailed in the Sept. 30 issue of the journal Science.