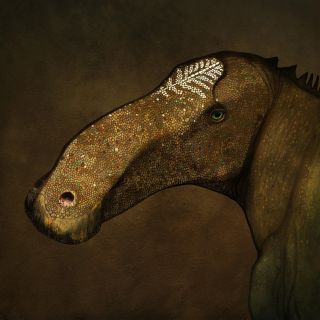 Artist's reconstruction of the head of Probrachylophosaurus bergei in life.
(Image: © Illustration by John Conway)

A newly classified duck-billed dinosaur species snagged the nickname "superduck" due to its giant pelvis. But a small feature on its skull is a much bigger deal to paleontologists because it helps to define headgear evolution in hadrosaurs, a group of herbivorous duck-billed dinosaurs.

The new dinosaur's name is a tongue twister: Probrachylophosaurus bergei (pro-BRACK-ee-loe-fa-SORE-us ber-GAY.) It would have been about 30 feet (9 meters) long and weighed around 5 tons (4,500 kilograms). The crest atop its head may have barely cleared its brow, but it identifies the hadrosaur as a link between a predecessor species with a flat skull and later relatives with more dramatic paddle-shaped crests that reached the backs of their heads. [See Photos: Digging Up "Superduck," a New Hadrosaur]

Piecing together this dinosaur took several decades. Paleontologists discovered leg and pelvis bones in Montana's Judith River Formation, a rich source of dinosaur fossils, in 1981. Though scientists knew the bones belonged to a 79-million-year-old hadrosaur, they couldn't determine if the remains represented a new species.

"Typically, we need the skull to know what species we have," Elizabeth Freedman Fowler, curator of paleontology at the Great Plains Dinosaur Museum and an adjunct professor at Montana State University, told Live Science. "For most closely related animals, the variations are all going to be up in the skull," said Freedman Fowler, who co-authored the new study detailing the findings.

But scientists didn't have that critical piece until 2007, when weather and erosion exposed pieces of the skull at the site where paleontologists first recovered the pelvis and leg bones. Freedman Fowler and her colleagues were digging up hadrosaur fossils in a different location when they got the call from Fowler's mentor, paleontologist Jack Horner. The quarry holding the skull bones was vulnerable to fossil poaching, and Freedman Fowler knew they had to recover the fossils for analysis before they were stolen.

As soon as the scientists cleaned up the bones in the lab, they realized the skull was special. "It had this really strange, small crest, not like anything we'd ever seen before," Freedman Fowler told Live Science. [Photos: Discovering a Duck-Billed Dinosaur Baby]

The newfound skull most resembled those of hadrosaurs Acristavus and Brachylophosaurus, but its diminutive crest set it apart from both.Acristavus, the earlier hadrosaur, had a flat skull with no crest (its name, in fact, means "noncrested ancestor"). The later hadrosaur, Brachylophosaurus, had a crest extending toward the back of its head. Freedman Fowler and her team suspected that the small-crested dinosaur was a new intermediary species.

Hadrosaurs, arguably the most endearing dinosaurs of the Late Cretaceous period, sported a range of crests that could be hollow or solid, resembling roosters' combs, tapirs' trunks or poorly modeled ashtrays. No one knows for sure what purpose their headgear served, but it may have been used for mating displays, or even to produce unique vocalizations.

The tiny crest topping Probrachylophosaurus probably served as some kind of species identification, Freedman Fowler said. "We think that they were display features for recognizing members of their own species and recognizing how mature they were," Freedman Fowler said. Because the crest was so small, it would have been hard to see it from a distance, so there may have been something distinctive about its coloration, she added.

Filling in the gaps

The Judith River Formation is far from tapped out — Freedman Fowler asserts that many more Late Cretaceous fossils are yet to be discovered there, including more transitional species like the new hadrosaur. Every new discovery, she pointed out, creates connections between formerly isolated species, bringing dinosaur relationships more clearly into focus.

The finding was detailed online Nov. 11 in the journal PLOS ONE.