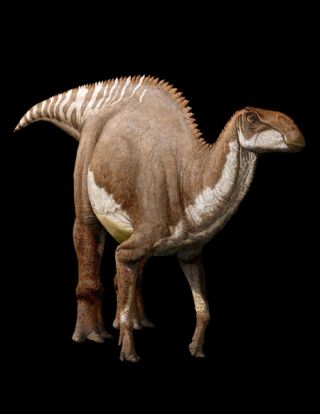 An artist's representation of Leonardo, a well-preserved fossil of a 77 million-year-old duckbilled dinosaur.
(Image: © Houston Museum of Natural Science)

An analysis of the gut contents from an exceptionally well-preserved juvenile dinosaur fossil suggests that the hadrosaur's last meal included plenty of well-chewed leaves digested into tiny bits. The fossil, Brachylophosaurus canadensis aka "Leonardo," is the second well-substantiated case in which the gut contents of a plant-eating dinosaur have been revealed, said Justin S. Tweet, who was a graduate student at the University of Colorado at Boulder when he studied the fossil with colleagues there including paleontologist Karen Chin. The dino, found in what geologists call the Judith River Formation, in Montana, will go on display to the public Friday at the Houston Museum of Natural Science's "Dinosaur Mummy CSA: Cretaceous Science Investigation" exhibition. "Our interpretation suggests that the subadult Judith River Formation brachylophosaur had a leaf-dominated diet shortly before its death," the authors write in the September issue of PALAIOS, the journal of the Society for Sedimentary Geology. Skin and scales Leonardo is a 77-million-year-old duckbilled dinosaur whose remains are covered with patterned fossilized skin. The specimen has given scientists a rare peek inside a dinosaur. Digital technology and X-ray scans, some of which were conducted at NASA Johnson Space Center's Ellington Field facility in Texas, has helped paleontologists reconstruct what Leonardo looked like in life, what it ate, its muscle mass and its limb movements. An analysis of pollen found in the specimen's gut region revealed a variety of plants, including ferns, conifers and flowering plants. Although the pollen could have been ingested when the dinosaur drank water, the tiny leaf bits, under 5 millimeters (a quarter-inch) in length, indicate that Leonardo was a big browser of plants, Chin said. Hadrosaurs were certainly capable of processing food into tiny bits in part with their continually replacing teeth and grinding jaws. The tricky part with the analysis was building a case that the plant matter found inside the gut came from the dinosaur's last meal, not from material that penetrated the body or flowed into the area after death. The case was helped by the fact that Leonardo was buried quickly and undisturbed by scavengers, and its body cavity appears to be undisturbed. At least 12 percent of the gut contents in the carcass included organic matter, such as leaves. The rest was clay and grit. Some of the inorganic stuff probably flowed into the body after death, Tweet said. Overall, the most exciting part of the research was working with material that could actually be gut contents, Tweet said. "This is very rare for dinosaurs, where we usually have to settle for generalizations of feeding behavior based on skull anatomy," he told LiveScience. The research was funded by grants through the University of Colorado and its Museum of Natural History and a Geological Society of American Graduate Student Grant. 'Cranial Cuisinart' Houston Museum of Natural Science Curator of Paleontology Robert T. Bakker, one of the first scientists to work on the fossil, said that duckbilled dinosaurs like Leonardo had large beaks and jaws full of tiny teeth, about 800 of them, that ground and chopped tough plants and plant parts, including conifer needles, bark and twigs, like a "cranial Cuisinart." The contents of the gastrointestinal tract then were processed by digestive juices and gut microbes. Leonardo has a pebbly skin texture, like the lower leg of an ostrich or another big bird, Bakker said, but on the front of Leonardo's ankle and shin, the skin becomes very thick like armor which helped it move through the underbrush. The fossil was discovered in the summer of 2000 during an expedition to a cattle ranch about 15 miles north of Malta, Mont. Leonardo was named after graffiti found on a nearby rock that read: "Leonard Webb loves Geneva Jordan 1916." The Houston exhibition will also feature an icthyosaur "mummy," which has contents of her intestines and four babies preserved inside her body, and the only mummified Triceratops skin ever found. The exhibition's opening was delayed a week as a result of conditions and power losses in the Houston area after Hurricane Ike, including five days without primary power at the museum. Leonardo and other exhibition specimens were unharmed, a museum spokeswoman said.