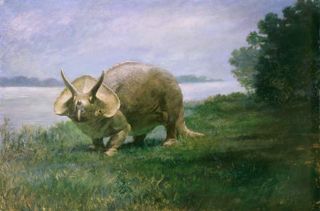 An illustration of a Triceratops. AP/Smithsonian

The two massive horns above Triceratops' eyes grew from tiny stubs that curved backwards, then forwards before settling into a permanent shape in the dinosaur's adulthood, a new study finds.

Triceratops [illustration] was a ponderous plant-eating creature best known for its great bony head frill and three horns: one above each eye and one above its beaklike mouth. It lived during the late Cretaceous Period, making it among the last dinosaurs to evolve before their demise about 65 million years ago. An adult could grow up to 30 feet long and weighed up to 5 tons.

Researchers John R. "Jack" Horner of the University of Montana and Mark Goodwin of the University of California, Berkeley examined the skulls of 10 Triceratops that died at different ages [image], including recently unearthed baby and juvenile specimens. The baby skull was just over a foot long, while adult skulls were more than six-feet in length.

The horns on the baby were only about an inch-long. But the horns lengthened and curved as the dinosaurs aged: backwards for juveniles, straight again for young adults, and finally, forwards for adults.

The horns of adult Triceratops grew up to 3 feet long and the forward curvature marked their owners as sexually mature, the researchers speculate.

Triceratops' bony frill changed [image] with age as well. In juveniles, the frill edge was adorned with triangular bones resembling arrowheads. The spiky edges flatten as the animal aged and were barely visible in adults.

It was once thought Triceratops used its horns as weapons against predators like Tyrannosaurus rex. But most paleontologists now agree that the elaborate adornments of many dinosaurs—Triceratops' horns, the bony plates of Stegosaurus and the odd head crests of duck-billed dinosaurs—were used for species recognition or mate attraction, much like colorful feathers in birds.

"More than likely, it has something to do with display," Horner told LiveScience. "To let adults know when juveniles finally reached sexual maturity."

The study is detailed in the November issue of the journal Proceedings of the Royal Society B.