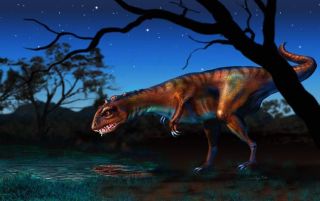 The ancient asteroid that slammed into the Gulf of Mexico and purportedly ended the reign of the dinosaurs occurred 300,000 years too early, according to a controversial new analysis of melted rock ejected from the impact site.

The standard theory states that a giant asteroid about 6 miles wide smashed into the Yucatan Peninsula close to the current Mexican town of Chicxulub about 65 million years ago. The impact raised enough dust and debris to blot out the sun for decades or even centuries.

Such a large impact would also have triggered a host of natural disasters, including volcanic eruptions, earthquakes, tsunamis and global firestorms that fried, starved and suffocated the beasts.

But Markus Harting of the University of Utrecht in the Netherlands and a small group of scientists thinks the Chicxulub impact happened too early to have been the infamous dinosaur-killer.

Harting analyzed BB-sized glass spherules found in multiple layers of sediments from northeast Mexico, Texas, Guatemala, Belize and Haiti—regions that are in relatively close proximity to the Chicxulub impact site.

Based on the spherules' chemical composition, Harting concludes they all formed from rock melted during the Chicxulub impact. The spherules were not found in a single layer of sediment, however, but were instead scattered throughout several layers. Some appeared worn and weathered, as if they had been exposed to the elements and shifted around.

Some of the spherules Harting found were located meters below the layer of iridium-rich clay that marks the end of the Cretaceous period 65 million years ago, when large dinosaur indeed disappeared from the planet (some hung on and became birds). This layer is also known as the "K-T boundary." Iridium is a chemical element commonly found in asteroids and comets and the K-T boundary has been touted as the smoking gun linking the dinosaurs' demise to an asteroid impact.

Harting believes his work supports the theory that the Chicxulub impact occurred roughly 300,000 years earlier than many scientists have commonly assumed. His findings will be presented at the Backbone of the Americas-Patagonia to Alaska meeting in Argentina on April 3.

Due to the large margins of error involved, Harting could not determine the age of the spherules directly, but instead relied on studies of sediment deposits performed by Gerta Keller at Princeton University and colleagues.

Keller cites a thick layer of sediment found between the Chicxulub impact layer and the K-T boundary as evidence that the Chicxulub asteroid impact occurred well before the extinction of the dinosaurs. Keller also claims to have found evidence of Cretaceous-era fossils in sediments above layers of rock linked to the asteroid impact.

Keller thinks dinosaurs survived the Chicxulub impact but were finished off by a larger, more catastrophic impact that happened roughly 300,000 years later. It was this later impact, Keller says, that is responsible for the K-T boundary.

"There must have been an asteroid impact at the K-T boundary and it must have been bigger than Chicxulub, because Chicxulub didn't cause any mass extinction," Keller told LiveScience today.

She believes the asteroid that did kill the dinosaurs probably struck Earth somewhere else and remains undiscovered.

The views of Keller and her colleagues are controversial within the scientific community. Many scientists disagree with her team's interpretation of data.

Recent work by other scientists, for example, has shown that fossil records could have been shuffled around by an enormous tsunami that would have followed such a significant asteroid impact. This would explain Keller's anomalous fossils, they argue.

"All of the deposits around the Caribbean from this period have experienced tsunami, landslide, rebound and other phenomena directly resulting from the enormous impact," said Denton Ebel, assistant curator of meteorites at the American Museum of Natural History. "They're saying that there's multiple ejecta layer, but they're looking at sediment that has been subjected to perhaps the biggest mechanical upheaval on the planet in the past 100 million years."

Ebel compares Harting's spherules analysis to trying to understand eruption history of Mount St. Helens by examining a sediment core drilled out of the top of the volcano. "It would be impossible. Regions close to the volcano would be a big jumbled mess of rocks that had fallen back in and stuff coming out," Ebel said in a telephone interview. "What you do is look a mile or two away at the nice ashfall layer which beautifully displays the history of the erupted volcano."

Because the Chicxulub impact would have been many orders of magnitude stronger than any volcano eruption, scientists have to travel hundreds or even thousands of miles from ground zero to find sediment layers not disturbed by the impact. Frank Kyte of the University of California, Los Angeles has done just that.

Kyte has analyzed the chemical composition of spherules collected from the K-T boundary layer in places all around the world, including deep ocean basins, where the sediment isn't as churned up as in the Gulf of Mexico. From his studies, Kyte has concluded that there is only one spherule layer, not many as Harting claims, and that this layer is located precisely at the K-T boundary.

In light of all the evidence linking the Chicxulub impact with the extinction of the dinosaurs, Kyte thinks there is a better explanation for Harting's findings.

"There are a few places where you can find spherules at what appear to be two different heights, but there has been pretty solid arguments presented showing that this is the result of these spherules being moved down the section by slumping," Kyte told LiveScience.

Kyte dismisses the idea that an asteroid impact different from the one that occurred at Chicxulub was responsible for the dinosaur's mass extinction.