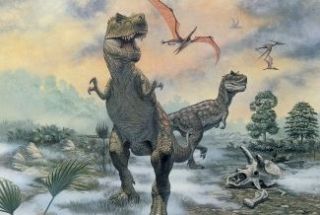 Two Tyrannosaurus rex adults are alert and ready to hunt. A pterodactyloid pterosaur is overhead. The scene takes place on the margin of a floodplain in the future area of western Montana, during the Hell Creek formational time of the late Cretaceous Period.
(Image: © "Awakening of Hunger" (Tyrannosaurus rex) Â© 1985 Mark Hallett, via the National Science Foundation)

The Age of Dinosaurs ended millions of years ago but paleontologists are still attempting to get a handle on the immense diversity and diverse immensity of these creatures.

Take the report last month that Spinosaurus is now officially the biggest carnivorous dinosaur known to science. This two-legged beast actually strode onto the fossil scene in 1915 when a specimen was described by German paleontologist Ernst Stromer. He figured this theropod (defined as a two-legged carnivore) was bigger than Tyrannosaurus rex, but the original Spinosaurus bones were destroyed by Allied bombs in 1944. So the T. rex reigned as the king size, carnivorous land beast for decades.

Then along came Giganotosaurus 11 years ago.

Now Cristiano Dal Sasso of the Civil Natural History Museum in Milan says Giganotosaurus has been dethroned based on estimates from a new Spinosaurus skull.

So just how do all these carnivores match up?

For the ultimate in dinosaur length though, a vegetarian diet prevailed. Herbivorous sauropods dwarfed carnivorous theropod dinosaurs, and most scientists think Argentinasaurus was the longest of all dinosaurs.

Paleontologists have only fossils to compare dinosaur sizes, and those fossils are often damaged or incomplete. The same bone from numerous specimens is often lacking, so scientists often must estimate the total size of an animal from a partial skeleton, as with the new Spinosaurus skull fragments.

Greg Erickson of Florida State University says mass, not length, is the best standard for comparing dinosaur size because it gets around the problem of differently shaped animals. Mass is best estimated, he said, by measuring the circumference of the thighbone, which bears much of the animal's weight.