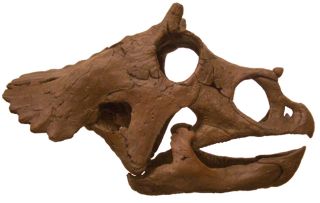 This cast of the Triceratops skull (with the beak filled in, since those bones were not found) shows a shortened face and big eyes characteristic of many animals in youth. The sprouting horns grow to three feet in the adult, while the scalloped edges of the frill, which can grow to seven feet across, become more wavy and develop scales.
(Image: © Mark Goodwin, UC Berkeley Museum of Paleontology)

A baby Triceratops skull suggests the impressive horns of the beast were for more than just attracting a mate.

The three-horned Triceratops dinosaur weighed up to 10 tons and had one of the largest skulls of any land animal on the planet.

Now the smallest skull of the species suggests what the horns were for.

An adult Triceratops skull, six feet long, dwarfs the foot-long skull of a year-old Triceratops (bottom center). The pair are on display in the Marion Koshland Bioscience and Natural Resources Library in the Valley Life Sciences Building. Photos by Mark Goodwin, UC Berkeley Museum of Paleontology

"The baby Triceratops confirmed our argument that the horns and frill of the skull likely had another function other than sexual display or competition with rivals, which people have often argued, and allows us to propose that they were just as important for species recognition and visual communication in these animals," said paleontologist Mark Goodwin at the University of California at Berkeley.

The young one was about one year old and 3 feet long. As with many young animals, it had a short nose compared to the adults.

The skull is now on display at the university's Valley Life Sciences Building. Goodwin describes it in the March issue of the Journal of Vertebrate Paleontology and the university issued a statement on it today.

The baby's skull, along with a few vertebrae, teeth and bony tendons, were discovered by amateur fossil hunter Harley Garbani in 1997 in Montana's Hell Creek Formation.

The two brow horns are straight and about an inch long in the baby.

The brain casing had not yet fused in the young beast.

"The baby skull shows us how the bones that make up the skull actually grew and fit together, because we see the sutures and sutural surfaces, which were completely obliterated in the adults," Goodwin said.