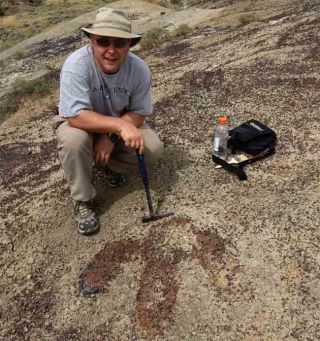 Phillip Manning helped to discover this dinosaur footprint that could've been made by a meat-eating tyrannosaur 65 million years ago.
(Image: © Phillip Manning/University of Manchester)

MARMARTH, N.D.—It's 110 degrees at the end of July here in the badlands around the border of North Dakota and Montana as the pickaxes swing down against the Hell Creek rock. The volunteers who have braved rattlesnakes and scorpions to work here in the swirling dust may look as if they are in prison, but they are in a time machine, traveling back 65 million years by excavating through rock.

And if these volunteers are lucky, they can keep bones they find.

The rock bed known as the Hell Creek Formation is one of the richest fossil troves in the world. The stone dates back to the end of the age of the dinosaurs, laid down by rivers that flowed eastward to an inland sea that ran from Canada to the Gulf of Mexico.

Back then, the land was not all dusty bluffs and canyons as it is now, but lush wetlands, as the gar scales, ray teeth, petrified wood and turtle shells everywhere testify to. The area is now rich with the bones of Triceratops, as well as duckbilled dinosaurs known as hadrosaurs that as adults were up to 35 feet long.

In the dig season from later June to mid-August, amateur and professional paleontologists from around the world venture to a ranch here. Marmarth is an old railroad town where the trains no longer stop. The ranchland is owned by the family of Tyler Lyson, 23, Yale doctoral student and cofounder of the nonprofit Marmarth Research Foundation. Lyson started digging for dinosaurs when he was 12.

Up to a dozen or more volunteers are in Marmarth each week to go hunting for ancient treasure. Days are spent prospecting for new fossils and marking the coordinates of finds with handheld GPS units, or digging at established sites with picks and shovels down to the bone layer, after which dirt and sand are meticulously scraped away from the bones with scalpels and paintbrushes. Nights are spent at the lab cleaning the fossils using dental picks and miniature sandblasters and jackhammers.

The most scientifically valuable fossils, such as mummified impressions of dinosaur skin, are kept for further research. Since the digs are on private land, however, participants can with the foundation's consent keep fossils as souvenirs without the permits needed for excavations on state and federal land.

Lou Mazzella, 30, an art supply store manager in New York and veteran of three dig seasons, has taken home pieces of Triceratops frill and helped expose more fossils this summer in the badlands.

"There's nothing quite like uncovering something for the first time. It's the excitement of finding something new," Mazzella said.

While professional paleontologists welcome the passion of amateurs, many express concerns that amateurs might impact the scientific value of fossils, said Walter Joyce, collections manager of vertebrate paleontology at the Peabody Museum of Natural History at Yale.

Amateurs can inadvertently damage finds, or incorrectly or insufficiently document the context specimens are discovered in, or not provide scientists access to example samples.

That being said, when it came to the Marmarth Research Foundation, "of all the digs I know, they're the only one that's purely amateur that is dedicated to preserving the scientific context of finds," Joyce said. "They're seeking so much help from professionals and so dedicated to making it professional that they are basically professionals."