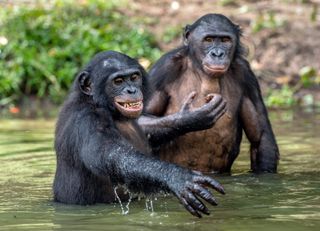 Bonobos may have interbred with a mysterious "ghost ape" hundreds of thousands of years ago.
(Image: © Sergey Uryadnikov/Shutterstock)

Mysterious "ghost apes" may have interbred with the great apes known as bonobos just as modern humans repeatedly had sex with now-extinct human lineages, a new study finds.

Bonobos are, with chimpanzees, humanity's closest living relatives. Together, bonobos and chimps are part of the group Pan, just as modern humans and extinct lineages of humans make up the group Homo.

Recently, geneticists discovered that ancestors of modern humans often interbred with extinct human lineages such as Neanderthals and Denisovans. The DNA from such trysts continues to influence modern humans, from potential immune boosts to increased risk for depression, obesity, heart attacks and nicotine addiction. [In Photos: Bones from a Denisovan-Neanderthal Hybrid]

Previous research suggested that bonobos and chimps may have interbred as well. For example, prior work found genes likely flowed from bonobos to chimpanzees more than 200,000 years ago.

By analyzing the genomes from 10 bonobos and 59 chimpanzeess for signs of genes from unknown ancient groups, scientists have now uncovered evidence that bonobos also had sex with a now-extinct ape lineage.

"We know humans have interbred with Neanderthals and Denisovans and probably other archaic human populations, and it's interesting to see that happened with our closest living relatives as well," said study lead author Martin Kuhlwilm, a population geneticist at the Biomedical Research Park of Barcelona, Spain.

The researchers looked for unusual patterns in the ape genomes that suggested ancient interbreeding with other lineages. This included a hunt for long haplotypes, or sets of DNA sequences, that were seen in one species but not the other. The reasoning is that short haplotypes are potentially explained by a few chance mutations within these species, but comparatively long haplotypes are instead likely inherited from a significantly different lineage.

Although these genetic contributions from interbreeding dwindle over time, remnants would still exist as shorter, unusual fragments. By looking at the length of these odd haplotypes, scientists can estimate how far back the interbreeding occurred.

By isolating the DNA from this "ghost ape," the researchers said they could reconstruct up to 4.8% of its genome. They said genes in these archaic fragments may have consequences on the workings of the brain, kidneys and immune system of bonobos. [8 Human-Like Behaviors of Primates]

"It's an extinct branch of the Pan family tree," Kuhlwilm said.

The researchers suggested the rendezvouses between bonobos and the ghost apes happened sometime between 377,000 and 637,000 years ago. In contrast, they detected no signs that chimpanzees ever interbred with any now-extinct lineages, perhaps because the Congo River cut off chimpanzees from other groups, Kuhlwilm said.

In the future, the researchers would like to look for signs of interbreeding within other great apes, Kuhlwilm said. Analyzing great ape genomes could shed light on extinct lineages in a way the fossil record likely cannot.

"We have absolutely nothing in terms of bonobo fossils," Kuhlwilm said. "There is one chimp fossil that's been unearthed that's maybe 400,000 years old, but that's basically it for African great apes. By analyzing living apes, we can get information on extinct ape populations that we can't get from ancient DNA, since there are almost no ancient ape fossils."

Bonobos are a species well-known for its promiscuity. "We can speculate if that might have facilitated these interactions," Kuhlwilm said.