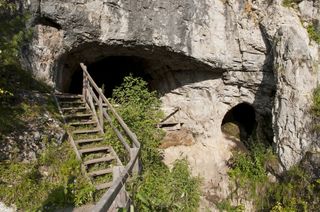 The existence of this archaic human group came to light in 2010 when DNA from a piece of a finger bone and two molars that were excavated at Denisova Cave in the Altai Mountains of southern Siberia was studied. Shown here, the entrance to the cave.
(Image: © Max Planck Institute for Evolutionary Anthropology)

Very little is known about the Denisovans. The first evidence of them was discovered in Denisova Cave in Siberia in 2008, and DNA from their fossils suggests they shared an origin with Neanderthals but were nearly as genetically distinct from Neanderthals as Neanderthals were from modern humans.

Previous work found that any modern humans with ancestry outside of Africa inherited about 1.5 to 2.1 percent of their DNA from Neanderthals. In contrast, prior research suggested that substantial levels of Denisovan ancestry are found only in the Pacific islands of Melanesia.Scientists are increasingly uncovering the effects of Neanderthal ancestry on modern humans, from potential immune boosts to increased risks for depression, obesity, heart attacks, nicotine addiction. However, relatively little was known about the effects of Denisovan ancestry.

"We knew there was Denisovan ancestry in Melanesians, but we didn't have a map of where those Denisovan sequences were located in the genome and what they might do," Akey said. "Now we've mapped where those sequences are."In the new study, scientists analyzed the genomes of 1,523 people from around the world, looking for archaic genetic information from Neanderthals or Denisovans. (Research has suggested that early modern humans interbred with both groups.) As expected, the populations outside Africa that the researchers surveyed inherited about 1.5 to 4 percentof their genomes from Neanderthals.

Akey and his colleagues discovered there were at least three distinct instances of Neanderthal gene flow into modern human populations. However, there was likely just one such instance of gene flow when it came to Denisovans. The researchers found that the people in the study who lived in the southern Pacific islands of Melanesia were the only population that had significant levels of Denisovan genetic ancestry. Whereas about 1.7 percent of the genomes of the Melanesians came from Neanderthals, between about 1.9 and 3.4 percent of their genomes came from Denisovans, according to the study.

"That's pretty strange," said Joshua Akey, a senior author of the study and a population geneticist at the University of Washington in Seattle. "What we know of Denisovans comes from a pinky bone from a cave in northern Siberia, yet the only modern human population with appreciable levels of Denisovan ancestry is a couple of thousand miles away from that cave, in Melanesia." [Denisovan Gallery: Tracing the Genetics of Human Ancestors]

The finding suggests that the range of the Denisovans was much larger than that of the Neanderthals, extending all the way from Siberia down to Southeast Asia, Akey said. "It's unclear why Melanesians are the only modern human population now that has an appreciable percentage of Denisovan ancestry," he told Live Science.

The researchers also discovered that Neanderthal and Denisovan DNA was not scattered evenly in the modern human genome. Rather, it was concentrated more heavily in some regions than others, they said. This may be because, in certain sections of the DNA, mixing sequences from Neanderthals or Denisovans with those of modern humans was detrimental in some way to the individuals who had those mixtures, the researchers said. Thus, over time, evolution purged those deleterious mixes from the modern genome, they added.

Intriguingly, the areas of the modern human genome that were generally devoid of Neanderthal or Denisovan genetic sequences are areas rich in genes linked to the brain, particularly the developing cortex and the adult striatum. The cortex is the center of higher mental function in humans, while the striatum is linked to responses to rewards.

In contrast, there were a handful of spots in the Melanesian genome where archaic genetic sequences made up 50 to 70 percent of those regions. For these areas of the genome, the Neanderthal or Denisovan genetic information likely held advantages "that helped modern humans survive and reproduce," Akey said. [Human Origins: How Hominids Evolved (Infographic)]

In these regions of the genome, there are genes involved in blood sugar levels, fat metabolism and the immune system, Akey said. "The immune system is a pretty frequent target of evolution," Akey said. "As our ancestors were spreading to new environments all over the world, hybridization would have provided an efficient way to pick up copies of genes adapted to local environmental conditions, and immune-related genes probably helped our ancestors handle new pathogens they were exposed to."

Future research can investigate the imprints of Denisovan ancestry in other modern human populations, Akey said. "We want to understand what it means to be a modern human," Akey said — and, by that light, what it might have meant to be a Neanderthal or a Denisovan.

The scientists detailed their findings online today (March 17) in the journal Science.