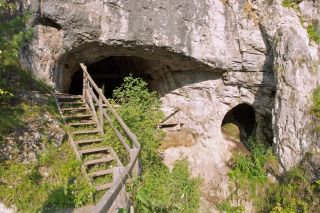 The toe bone of a Neanderthal woman was uncovered in the Denisova Cave (shown here) in southern Siberia, the same place where the first signs of the Denisovans, a relatively newfound human lineage, were found.
(Image: © Bence Viola)

The existence of a mysterious ancient human lineage and the genetic changes that separate modern humans from their closest extinct relatives are among the many secrets now revealed in the first high-quality genome sequence from a Neanderthal woman, researchers say.

The Neanderthal woman whose toe bone was sequenced also reveals inbreeding may have been common among her recent ancestors, as her parents were closely related, possibly half-siblings or another near relation.

Although modern humans are the world's only surviving human lineage, others also once lived on Earth. These included Neanderthals, the closest extinct relatives of modern humans, and the relatively newfound Denisovans, whose genetic footprint apparently extended from Siberia to the Pacific islands of Oceania. Both Neanderthals and Denisovans descended from a group that diverged from the ancestors of all modern humans. [See Photos of Neanderthal Bone & Denisovan Fossils]

The first signs of Denisovans came from a finger bone and a molar tooth discovered in Denisova Cave in southern Siberia in 2008. To learn more about Denisovans, scientists examined a woman's toe bone, which was unearthed in the cave in 2010 and showed physical features resembling those of both Neanderthals and modern humans. The fossil is thought to be about 50,000 years old, and slightly older than previously analyzed Denisovan fossils.

The scientists focused mostly on the fossil's nuclear DNA, the genetic material from the chromosomes in the nucleus of the cell that a person receives from both their mother and father. They also examined the genome of this fossil's mitochondria — the powerhouses of the cell, which possess their own DNA and get passed down solely from the mother.

The investigators completely sequenced the fossil's nuclear DNA, with each position (or nucleotide) sequenced an average of 50 times. This makes the sequence's quality at least as high as that of genomes sequenced from present-day people.

The genetic analysis revealed the toe bone belonged to a Neanderthal. When compared with other Neanderthal mitochondrial DNA samples, this newfound fossil's closest known relatives are Neanderthals found in Mezmaiskaya Cave in the Caucasus Mountains about 2,100 miles (3,380 kilometers) away.

These findings helped the scientists refine the human family tree, further confirming that different human lineages interbred. They estimated about 1.5 to 2.1 percent of DNA of people outside Africa are Neanderthal in origin, while about 0.2 percent of DNA of mainland Asians and Native Americans is Denisovan in origin.

Intriguingly, the scientists discovered that apparently Denisovans interbred with an unknown human lineage, getting as much as 2.7 to 5.8 percent of their genomes from it. This mystery relative apparently split from the ancestors of all modern humans, Neanderthals and Denisovans between 900,000 years and 4 million years ago, before these latter groups started diverging from each other.

This enigmatic lineage could even potentially be Homo erectus, the earliest undisputed predecessor of modern humans. There are no signs this unknown group interbred with modern humans or Neanderthals, Prüferadded. [The 10 Biggest Mysteries of the First Humans]

"Some unknown archaic DNA might have caught a ride through time by living on in Denisovans until we dug the individual up and sequenced it," Prüfertold LiveScience. "It opens up the prospect to study the sequence of an archaic (human lineage) that might be out of reach for DNA sequencing."

Genetic analysis revealed the parents of the woman whose toe bone they analyzed were closely related — possibly half-siblings, or an uncle and niece, or an aunt and nephew, or a grandfather and granddaughter, or a grandmother and grandson. Inbreeding among close relatives was apparently common among the woman's recent ancestors. It remains uncertain as to whether inbreeding was some kind of cultural practice among these Neanderthals or whether it was unavoidable due to how few Neanderthals apparently lived in this area, Prüfer said.

"If one speculates that we modern humans carry some genetic changes that enabled us to develop technology to the degree we did and settle in nearly all habitable areas on the planet, then these must be among those changes," Prüfer said. "It is hard to say what exactly these changes do, if anything, and it will take the next few years to find out whether hidden among all these changes are some that helped us modern humans to develop sophisticated technology and settle all over the planet."

Prüfer and his colleagues detailed their findings in the Dec. 19 issue of the journal Nature.