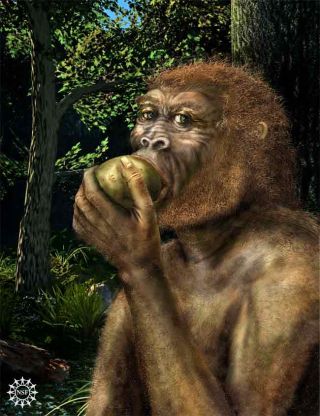 Editor's Note: This is Part 7 in a 10-part LiveScience series on the origin, evolution and future of the human species and the mysteries that remain to be solved.

As the only remaining primate built to stride the world on two legs, it would be easy to assume that our extinct relatives were much like us, if perhaps hairier with smaller brains.

But fossils reveal evolution could take our relatives in bizarre directions, involving skulls resembling nutcrackers and miniature bodies resembling the hobbits of Lord of The Rings.

"These fossils tell us that human evolution was a long process of experimentation, not the outcome of a long process of fine-tuning leading just to us," said paleoanthropologist Ian Tattersall at the American Museum of Natural History in New York.

When the first members of the human family tree, Homo, emerged roughly 2.5 million years ago, they were not the only bipedal primates roaming Africa. We shared the landscape with a relative with big mouths built for chomping — one commonly dubbed "Nutcracker Man."

"This is a creature very much like us that is competing with us, that is shaping our evolution just as we are shaping theirs," said paleoanthropologist John Hawks at the University of Wisconsin at Madison.

Just as humans might, Nutcracker Man — more formally known as Paranthropus boisei — likely descended from slender bipeds known as the gracile australopithecines, which include the famed 3.2-million-year-old fossil Lucy. "They're small-brained compared to Homo, but if you look at australopithecines, it has the biggest brains of any of them," Hawks said.

However, the skulls of Nutcracker Man and other so-called robust australopithecines were quite different from ones seen in the human family tree. They boasted huge jaws, big crests on top of the skull for giant chewing muscles, and large flat teeth with highly thickened enamel on them.

Paranthropus was always thought of as the quintessential nutcracker, but recent analyses of their teeth suggest it might strangely have preferred to eat a broad diet with squishy fruits.

"So why have giant teeth?" Hawks said. "The most popular idea is the 'fallback' notion, that at certain times you have to fall back on foods that wear on teeth, so the kind of stuff with grit."

"That doesn't quite seem totally satisfactory to me," Hawks added. "We think of them having big teeth, but really only the molar and pre-molar teeth are big, while their incisors and canines are teeny-tiny, much smaller than in humans, and you'd want to retain incisors if you're taking husks off fruit. So maybe they are specialized after all — there was interesting research into them eating papyrus roots, living in swampish places."

For years, the people of the Indonesian isle of Flores had legends of the Ebu Gogo — small, hairy cave-dwellers. Hardly anyone took these myths seriously until 2003, when diminutive skeletons with oversized feet and small chimp-sized brains were discovered there, which apparently survived until as recently as 12,000 years ago.

Scientists conjecture the creature, which stood about 3 feet 5 inches tall and weighed roughly 70 lbs., evolved its miniature size in response to its island home, where resources can often be limited — a phenomenon seen previously in many other animals, including dinosaurs, but not humans. Many of its features, such as the shoulder, wrist, jaw and teeth, are primitive, more closely resembling earlier australopithecines than modern humans. Still, it apparently walked upright and made stone tools, and some evidence suggests that it may have hunted and used fire.

Is the 'hobbit,' as even scientists call them, in fact an extinct human species, enough to be called Homo floresiensis? Are these skeletons just examples of stunted versions of Homo sapiens? Are they a different species but perhaps not a human one, instead as separate as chimpanzees are? These are the questions raging now over these skeletons among scientists.

"What do the hobbit show us?" Hawks asked. "If they are a human species, then it reveals that there isn't this inevitable progress toward big brains and more technological sophistication. It's very possible for humans to go off in a different direction."

"With these side branches, you get a sample of the different ways there are of being a hominid, but it could speak more about our evolution as well," Hawks added. "The fact that we stuck around when others didn't could be because of how we heavily leaned on technology in ways that earlier hominids didn't. Maybe that's what it took to survive this rat race."