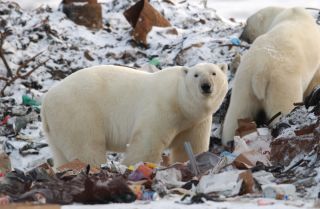 Polar bears ransack a garbage dump for food near Churchill, Manitoba. On Feb. 9, a small village in Russia declared a state of emergency after being visited by at least 52 hungry polar bears in the last two months.
(Image: © Shutterstock)

Fifty-two hungry polar bears have occupied Guba, a work settlement in a remote Russian Arctic archipelago. The animals reportedly attacked locals, ransacked garbage dumps and barged into residential buildings, according to a government statement translated from Russian and released this weekend.

The massive invasion of polar bears prompted regional officials to declare a state of emergency on Saturday (Feb. 9).

"People are scared, afraid to leave the house … afraid to let their children go to school," Zhigansha Musin, a local school administrator, said in the statement. "Constantly in the village are from six to 10 polar bears."

Belushya Guba is a settlement of about 2,000 people in Russia's remote Novaya Zemlya archipelago, which is best known for its spooky plankton blooms and apocalyptic nuclear bomb tests. It's not uncommon to see polar bears near the area's southern coasts, where they regularly converge in winter for seasonal seal hunts, according to Russia's state-run news site TASS. [The Frozen North: Stunning Images of Russia from Above]

But dumpster diving isn't all the beasts are doing. Photos and videos posted over the weekend show the bears traipsing through empty schoolyards and even infiltrating the corridors of office buildings in search of food.

To protect the town, locals have built extra fences around schools and other sites, while special patrols try to scare off the bears with cars and dogs. These measures have shown "no tangible results" in spooking the bears and a special task force of "experts" is en route to assess the worrisome situation, TASS reported

Shooting or killing polar bears is prohibited by the Russian government — however, culling the most aggressive bears might become "the only and necessary measure to ensure safety" in Belushya Guba if an alternative isn't found quickly, the government statement said.

The bears, meanwhile, are enduring a crisis of their own. Polar bears are considered a vulnerable species around the world as global warming continues to diminish their sea ice habitats. In the Arctic, where the world's estimated 22,000 to 33,000 polar bears live, average temperatures are warming twice as fast as the rest of the world, resulting in huge declines in sea ice every year, according to a December 2018 report released by the National Oceanographic and Atmospheric Administration (NOAA).

As sea ice melts, polar bears have to travel farther and work harder to catch seals, causing some to starve to death in the process. Others — like those that crashed Belushya Guba — would rather eat garbage, it seems.