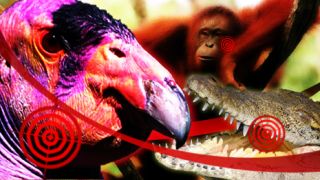 Think the polar bear has it bad? Here are 10 critters that are even worse off than our favorite threatened Arctic resident. Listed on the International Union for Conservation of Nature's (IUCN) Red List as critically endangered, meaning they face an extremely high risk of extinction in the immediate future, these animals may not live to see the end of the next decade without the a similar effort of human intervention that brought them to the brink in the first place.

The smallest of rhinoceroses (Dicerorhinus sumatrensis) used to flourish throughout the rain forests, cloud forests, and swamps of India and Southeast Asia. Now critically endangered, only six substantial populations remain in the wild, where they're estimated to number around 300. The main culprits for their dwindling numbers? Illegal poaching — their horns can fetch as much as $30,000 per kilogram on the black market — and the rampant destruction of their habitat in the name of human progress. Another reason the animals are doomed: Zoos have found very little success breeding the rhinos in captivity.

Although the International Whaling Commission banned the hunting of gray whales in 1947, the Western Pacific population (Esrichtiius robustus) never recovered from unchecked whaling in the 19th and early 20th centuries: Out of the 100 western grays that remain, only 23 are reproductive females. Their only known feeding ground off the northeastern coast of Sakhalin Island in Russia has since been annexed by oil companies whose exploration and mining activities, including high-intensity seismic surveying, drilling operations, increased ship and air traffic, and oil spills, are driving the 30-ton mammals to extinction.

Smaller and more slender than its gray-wolf cousin, the red wolf (Canis lupus rufus) managed to survive the Late Pleistocene ice age but may not be able to slink by modern man. Once widespread throughout the southeastern United States, red wolf-populations have been so devastated by predator-control programs and habitat loss that the dearth of breeding partners has led many of them to mate with coyotes instead, further reducing the number of genetically pure wolves. An estimated 100 wolves roam northeastern North Carolina today, while another 150 reside at captive breeding facilities across the United States. [Stunning Photos of Wolves]

Also known as the Amur tiger, the Siberian tiger (Panthera tigris altaica), whose former range included northeastern China, the Korean Peninsula, and Mongolia, is now almost completely confined to Russia's Amur-Ussuri region, where it is now protected. An estimated 350 to 450 tigers are believed to be still alive, although the persistent threats of habitat loss through logging and development, as well as poaching for their fur and bones continue to loom overhead. [Gallery: Tiger Species of the World]

The only ferret native to North America, and one of the most endangered mammals on the continent, the black-footed ferret (Mustela nigripes) teeters on the edge of extinction because human development has reduced their grasslands habitat to less than 2 percent of its original size. Because prairie dogs comprise 90 percent of a ferret's diet, the destruction of prairie-dog colonies due to habitat destruction, pest-elimination programs, and disease are huge contributors to the ferret's downward spiral.

Found only on the islands from which it derives its name, the freshwater Philippine crocodile (Crocodylus mindorensis) is legally protected in its native country, although it continues to face threats from human disturbance, including habitat loss and accidental death by dynamite fishing. A 1995 survey found only 100 adult crocs left in the wild, making the animal one of the most severely threatened species on the planet.

Although mountain gorillas (Gorilla beringeiberingei) managed to elude discovery until as late as 1902, their populations have been so decimated by deforestation, hunting, and the illegal pet trade that only 720 remain in the wild, split between Uganda's Bwindi Impenetrable National Park and the Virunga range of volcanic mountains on the borders of the Democratic Repulic of Congo, Rwanda, Uganda. Civil unrest in central Africa, particularly in the Congo, add another wrinkle in conservation efforts.

This rare and elusive species of shark (Glyphis gangeticus) makes its home in India's Ganges River, where it has a reputation as a man-eater, although people may be confusing it with the more dangerous bull shark. One of 20 sharks on the IUCN's Red List of endangered species, the Ganges shark is highly sought after for its oil. Rampant fishing, habitat degradation from pollution, and increasing river utilization, however, remain the primary causes for its rapid disappearance.

The smaller and rarer of the two species of orangutans, the fruit- and insect-loving Sumatran orangutan (Pongo abelii) is being pushed to imminent extinction by ... you guessed it ... habitat loss and poaching. While orangutans live for roughly 45 years in the wild, they also breed more slowly than other primates — a single female produces no more than three offspring in her lifetime — which means that orangutan populations grow slowly and are less tenacious when it comes to recovering from external threats.

A resident of the Grand Canyon area and the western coastal mountains of California, the carrion-eating California condor (Gymnogyps californianus) has a lifespan of 50 years, making it one of the world's longest-living birds. Because of poaching, lead poisoning, and habitat loss, however, it's also one of the world's rarest bird species—one that was almost wiped out completely in the 1980s. With the help of conservation efforts, 332 condors are now known to exist, including 152 in the wild.