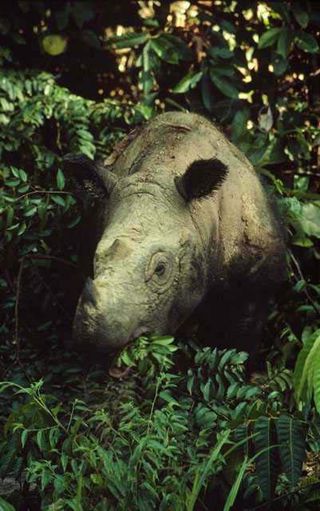 A new study of Sumatran rhinos on Borneo puts the numbers of one group in the central region of the island as low as 13, a precariously small number.

The population has declined due in part to poaching.

"If this band of rhinos is to have a healthy future in Borneo the poaching must be stopped immediately," said Sybille Klenzendorf, lead biologist of World Wildlife Fund's Species Conservation Program. “Their numbers are so small that losing one or two rhinos to a poacher could upset the remaining rhinos' chances of survival."

The survey was conducted in 2005 and released today. The announcement was delayed so officials could be dispatched in an effort to protect the remaining animals.

The entire island was thought to have had somewhere between 30 and 70 rhinos in the recent past. Some of the beasts probably have survived, but the survey did not cover the whole island. Some groups on the island are thought to have gone extinct already.

Overall, there are fewer than 300 Sumatran rhinos in the world, the scientists say. They live only on Borneo, Sumatra and the peninsula of Malaysia. They are one of the most endangered species of rhinoceros.

Rhino horns are used in traditional Asian medicines and sold on the black market.

"We believe this population may be viable and could recover if their habitat is protected and the threat of poaching is eliminated," said Christy Williams of WWF's Asian rhino program.

The Sumatran rhinoceros is called Dicerorhinus sumatrensis. Those in Borneo are a separate subspecies (D. S. harrissoni). They feed on tree leaves and rarely venture beyond the cover of the rain forest.