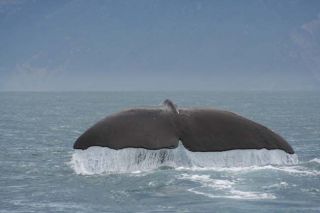 Finding one 30-ton grey whale [image] in the vast North Pacific might be like looking for a needle in a haystack, but finding 17,000 shouldn't be. But that's the situation researchers faced while searching for the creatures in their traditional summer feeding grounds last season—and the whales' absence has them concerned.

"We've just come off a second summer in Canada in which we've had next to no whales show up," said William Megill of Bath University in the UK. "Not only in our little area, but apparently throughout the traditional feeding areas from Washington on up north. We have no idea where the whales all went this year."

Grey whales usually spend their summers feeding in the waters of the North Pacific, from northern California to the Bering and Chuckchi Seas, because these areas are rich in plankton. But lately these regions haven't seemed to provide enough food for the whales.

"We know that the Bering Sea has taken a beating over the last ten years, and that productivity has plummeted there, forcing the whales into new habitat," Megill said today.

But researchers haven't yet found where these new feeding grounds might be.

"Presumably they found other feeding areas, but they will have had to look hard," Megill said. "This suggests they may be quite lean this winter, particularly as this is now the second summer they've had to deal with this problem."

Megill plans to study the impact of these changed feeding patterns on the whales as they spend the winter in the warm lagoons off Baja California, where they breed and give birth to their calves [video].

The 6,000-mile journey between their summer and winter homes is one of the longest known mammal migrations on the planet.

Generally, the whales rarely feed in their winter breeding grounds in and around Baja [image], but researchers observed them trying to feed from the lagoon bottoms last winter.

"How much they were getting out of the mud they were sifting, I don't know," Megill said. "But there was a lot of it going on, more than I'm used to seeing. We're expecting to see the animals feeding even more in Mexican waters this year."

Although they were removed from the endangered species list in 1994 because populations had recovered after nearly being hunted to extinction, the grey whales still face an uncertain future.

The research is sponsored by Earthwatch, an organization that supports scientific fieldwork and offers volunteers the chance to participate. Anyone interested in joining the Grey Whale expedition can visit the group's website, www.earthwatch.org, for more information.