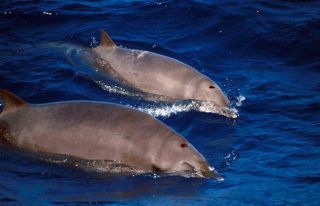 In this era of extreme sports, beaked whales take one activity to new depths by diving deeper than any other air-breathing species.

But new research shows that despite their deep-sea expertise, diving in shallow water can sometimes cause the whales decompression sickness, or what's commonly know as "the bends."

Beaked whales are medium-sized toothed whales with extended snouts. They range in length from 12 feet to 43 feet. A study of ten beaked whales found they dove as deep as 6,230 feet for up to 85 minutes [graphic].

Understanding how deep-diving whales operate is important because whales stranded during naval sonar exercises show symptoms of decompression sickness. The bends occur when gas bubbles form in the body when one surfaces too quickly from the high pressure environment of deep water.

In the two species of beaked whales studied, however, decompression sickness seems to occur when they start diving repeatedly to shallow depths. This appears to happen when Cuvier's (Ziphius cavirostris) [image] and Blainville's (Mesoplodon densirostris) [image] whales are exposed to sonar.

The researchers analyzed the whales by tagging them and recording their sounds and movements. Their data suggest that the greatest risk of decompression sickness stems from dives that occur between depths of 100 to 250 feet.

"The reason for this is that once the lungs have collapsed under pressure, gas does not diffuse from the lungs into the blood," Tyack said.  "Lung collapse is thought to occur shallower than 330 feet, so deeper parts of the dive do not increase the risk of decompression problems. However, if beaked whales responded to sonars with repeated dives to near 165 feet, this could pose a risk."

Scientists don't know why these two whale species make shallow dives and sometimes strand themselves on beaches when exposed to sonar. However, they believe studies such as this one provide the kind of data needed to develop methodsto reduce damage to whales.

The study is detailed in the current online issue of the Journal of Experimental Biology.