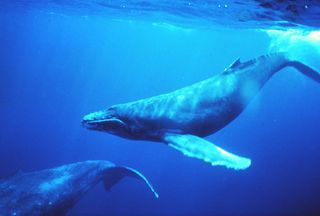 The love song of a humpback whale sounds magnificently free-flowing and improvised to the casual human listener.

But fresh mathematical analysis of shows there are complex grammatical rules. Using syntax, the whales combine sounds into phrases, which they further weave into hours-long melodies packed with information.

Although the researchers say these songs don't meet the linguistic rigor necessary for a true language, this is the first evidence that animals other than humans use a hierarchical structure of communication. Whales have also been found to sing in dialects.

The study is detailed online in the March issue of the Journal of the Acoustical Society of America.

The sound of love

Many animals use sight and smell to communicate, but these senses are limited in the ocean. Whales rely on sound, which travels four times faster in water than in air.

During mating season, which lasts six months, all humpback males sing the same song to woo the ladies. Over time, the group's song becomes progressively more complex, although researchers don't know quite why.

Presumably, as one whale finds mating success by tinkering with the song style, the rest of the guys imitate it to better their chances, said study co-author Ryuji Suzuki, a Howard Hughes Medical Institute predoctoral fellow.

The researchers used information theory—the mathematical study of data encoding and transmission—to pick apart the whales' songs. It turns out all those moans, cries, and chirps convey significant amounts of information.

Suzuki and his colleagues designed a computer program to break down each element of the songs, collected from humpbacks in Hawaii, and assign a symbol to each. Analyzing the complexity, redundancy, and predictability of a string of signals produces an unbiased assessment of the information they might contain.

"It's a good way to study humpback whale songs, because we don't know what they mean and we want to quantify their complexity and the information content across the seasons," Suzuki told LiveScience.

He then asked human test subjects, with no prior knowledge of whale songs or particular expertise in grammar, to classify each song according to the same criteria the computer used to break them up. Both the human characterizations and computer analyses indicate that whales communicate following rules for grammatical arrangement.

Despite these differences, the average amount of information carried by each song was about constant regardless of length, Suzuki said.

"Although whale song is nothing like human language, I wouldn't be surprised if some marine mammals have the ability to communicate in a complex way," Suzuki said. "Given that the underwater environment is very different from our world, it is not surprising that they would communicate in rather a different way from land mammals."