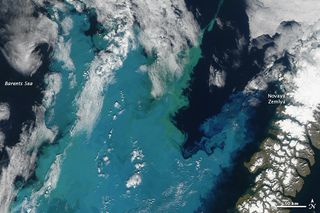 NASA's Aqua satellite captured this image of a brilliantly colored phytoplankton bloom off the coast of Novaya Zemlya, a Russian island, on Aug. 24.

Phytoplankton are tiny plant-like cells that thrive in the presence of dissolved nutrients, carbon dioxide and sunlight. Any given bloom can include a wide range of species, but different species dominate the sea under different conditions.

For example, a 2009 study found that in the Barents Sea, north of Russia, a type of algae called diatoms generally bloom each May, after winter and spring storms have mixed the ocean's layers and brought up nutrients from the deep.

In late summer, however, a type of plankton called coccolithophore proliferates. Coccolithophore are phytoplankton with plates of calcite, a calcium-containing mineral. The calcite of these blooms gives the ocean a light blue hue.

By August, the Barents Sea had settled into layers with warmer, less dense waters lying on top of colder, denser waters, according to NASA. These conditions are ripe for Emiliana huxleyi, one of the most widespread and important species of plankton in the world.

Novaya Zemlya is an Arctic archipelago off the coast of the Russian Federation, an extension of the Ural Mountains with an average altitude of about 3,280 feet (1,000 meters), according to NASA. In the latter half of the twentieth century, Novaya Zemlya was used as a nuclear test site. In 1961 the island was home to the detonation of the Tsar Bomba, which produced the most powerful explosion in human history.