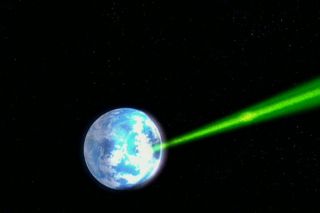 The armaments in the sci-fi realm often make today's "weapons of mass destruction" look puny. Instead of city-slaying nukes, the level of destruction needed to shock the consciences of technologically advanced cultures is more of the planet-destroying variety.

The most famous such doomsday device is the Death Star in "Star Wars." The moon-sized battle station fires a superlaser that blows the planet Alderaan to smithereens in Episode IV. But there's more than one way to knock out a planet, at least theoretically; antimatter or black hole "bombs" could certainly wreck some havoc.

While the physics behind world eradication is pretty straightforward, the technological means to do so remain (fortunately) very much out of reach.

"There is no conceptual reason you couldn't use some of these methods to destroy a very big object, but engineering a way to do it is the hard part," said Sidney Perkowitz, a physicist at Emory University in Atlanta, Georgia. [Top 10 Ways to Destroy Earth]

While it might sound like an attractive idea to evil, would-be galactic emperors, using a laser to explode a planet is not very practical. The laser would require a truly staggering amount of energy, at least by today's standards. Perkowitz and other scientists have done back-of-the-envelope calculations to show just how much. To atomize the planet Earth and fling all the pieces apart would eat up somewhere in the ballpark of two to the 1032 joules.  (A joule is a unit of energy equal to about the amount of work it takes to lift an apple three feet.) "That's the energy you would need to pour into Earth to break every [atomic] bond" and overcome gravity, said Perkowitz.

The most powerful laser in existence right now is the 500-terawatt beast at the National Ignition Facility (NIF) at Lawrence Livermore National Laboratory in Calif. Firing all 192 lasers together for just a few tens of billionths of a second can produce a record of around 2 megajoules.

Assume, then, that NIF's 500-terawatt laser were built on an orbital facility and beamed down at Earth. Also assume that the beam's energy would spread out and not just burn a tiny, tiny hole straight through the planet. Under this scenario, Perkowitz calculated it would take something like 12 billion years of continuous firing to destroy our home world.

"That Death Star is a hell of an achievement – it wiped a planet out in seconds," Perkowitz said. "We're a long way away from making a laser-style planet buster."

Physics-wise, the Death Star has a convenient workaround. A fictional "hypermatter" reactor, which cranks out the energy equivalent of several sun-like stars, is supposedly what powers the monstrosity.

Perhaps more conventional weapons, like a humongous nuclear bomb or a bunch of them – could that vaporize a planet? [Greatest Explosions Ever]

A beefy one-megaton nuclear bomb, like the modern B83 possessed by the United States, yields about 4 to the 1015 joules. To obliterate Earth (though surface life would almost entirely die out well before the planet itself shattered), you would need several quadrillion of these bombs.

The biggest nuclear bomb ever detonated, nicknamed Tsar Bomba and made by the Russians, packed a wallop of 50 megatons (though 100 megatons was possible if the bomb were fully juiced with uranium instead of lead). That's still incredibly measly when it comes to rocking a whole world.

So the laser and nuclear methods won't work; getting the most destructive bang for the buck, at least from a perspective of mass, calls for antimatter.

When antimatter and normal matter meet, they annihilate each other into pure energy. Nature produces miniscule bits of antimatter in violent, high-energy phenomena, such as cosmic ray impacts to the upper atmosphere and even in storm clouds. Antimatter can be made in laboratories – at great expense – and stored for more than ten minutes at a time.

Overall, though, antimatter is rare stuff. On the order of a trillion tons, or the amount in a dinosaur-exterminating, six-mile-wide asteroid, would need to be corralled to take out Earth.

"From the viewpoint of making antimatter artificially, all we've done really is nanograms [billionths of a gram]," said Perkowitz. "And as far as we know, we don’t have chunks of antimatter floating around in the universe."

Creating a deployable antimatter bomb seems like quite a stretch. Somehow manufacturing a sufficiently sized black hole could also end Earth; in the 2009 "Star Trek" reboot, a black hole (conjured via a fantastical substance called "red matter") swallows up the planet Vulcan, for example.

Perkowitz is not convinced on any feasibility arguments there, though. "I think matter-antimatter is the furthest we could go in speculating that at least has a little basis in it," he told Life's Little Mysteries.

To be clear, planetary vaporization is not necessary to bring a global society to its knees. Any number of less apocalyptically ambitious approaches, such as a nuclear winter spawned by thermonuclear war, could render much of a planet's surface temporarily uninhabitable for intelligent life,

The technology for widespread death and destruction is certainly at hand. But hopefully, Perkowitz said, humanity resists fabricating more technological terrors, a la the Tsar Bomba, in the future. "There's that bit of an ethical question," he said, "about why would we want to do that kind of thing anyway."