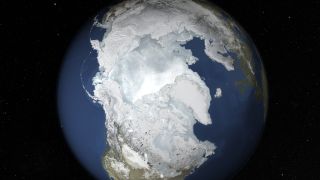 Arctic sea ice typically reaches peak levels during the winter months, but this year is one of it's lowest on record.
(Image: © NASA's Goddard Space Flight Center)

The ice covering the Arctic is at near record lows this year, and this icy deficit may impact weather around the world, NASA reports.

Every March, the Arctic's sea ice reaches its maximum cover, both in area and thickness, before it recedes to its yearly minimum in September. Live Science spoke with NASA scientist Walt Meier yesterday (March 25) to learn more about the low sea-ice level and what it means for the rest of the planet.

This winter has been extremely warm, Meier said. "Temperatures have been 10 to 15 degrees Fahrenheit [5.5 to 8.3 degrees Celsius] above normal [in the Arctic]. And we see that reflected in the very low sea-ice cover that generally grows to its maxima [maximum] around this time of year." [On Ice: Stunning Images of Canadian Arctic]

NASA has been collecting data on Arctic sea-ice extent (a term that refers to area and volume) since the late 1970s. Last year's maximum was the fourth-lowest on record, and 2016's sea ice extent is also among the lowest that scientists have seen in about 40 years.

The Arctic's sea-ice extent varies from year to year, but overall, researchers have seen a worrisome downward trend over time.

"We've lost about two Texases' worth of sea ice during the wintertime," Meier told Live Science. "In the summer, it's even more extreme. We've lost almost double that or more in terms of the area covered."

Furthermore, the ice is thinner now than it has been in past years. "So, we've lost about 50 percent of the volume of the sea ice, or the mass of the sea ice," since record keeping began, he said.

These dramatic changes don't stay in the Arctic. Typically, white-colored ice reflects about 80 percent of the sun's rays back into space. With less ice cover, the ocean absorbs a lot more of these rays, which warms the water.

For instance, cold air usually stays in the Arctic because of polar vortex winds, which make a circular, counterclockwise trip around the North Pole. But as sea-ice extent diminishes, the Arctic warms, high pressures build and the polar vortex weakens, allowing cold air to flow southward and cause fiercely cold winters, according to Weather Underground.

Within the next few days, NASA has two missions planned to take a closer look at the Arctic: Operation IceBridge and Oceans Melting Greenland, which has the rather fantastic acronym of OMG. These campaigns will take scientists to the Arctic and Greenland by land and air. Once there, they'll take measurements of the region's sea ice and glacier thickness.

"Basically, we can see these changes, but we don't fully understand the processes that are causing these changes," Meier said. "And so these aircraft flights that we're doing will allow us to collect very good … detailed data so that we can better understand these changes and better predict what is going to happen in the future."