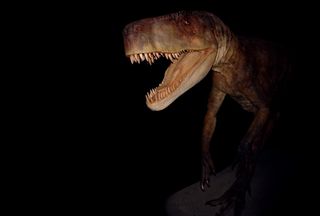 Smok wawelski, a T. rex-like apex predator that roamed what is now Europe about 210 million years ago, used to chew up its prey, bones and all. Scientists know this because they looked inside its poop.

In a new study published Jan. 30 in the journal Scientific Reports, researchers from Uppsala University in Sweden examined 10 large coprolites (aka, fossilized poos) believed to have been plopped onto what is now Polish land by Smok during the late Triassic period (251 million to 199 million years ago). Using high-energy X-ray scans, the team discovered that animal bones made up about 50 percent (by volume) of those ancient poos. The bones were gnashed up and slashed up with bite marks and could be traced to species all across the food chain, the researchers wrote.

"Juveniles, adults, fast- and slow-growing animals of both terrestrial and aquatic taxa were all present amongst the [Smok's] prey," the researchers wrote in their study. Likely prey included fish, amphibians and tusked, mammal-like herbivores called dicynodonts.

Smok (which translates to "dragon" in Polish) was a large, bipedal species of archosaur (a group of egg-laying animals that includes birds, crocodiles and dinosaurs) that lived about 140 million years before predators like T. rex ruled the land. And while it's not so unusual for modern archosaurs like birds and crocs to swallow their prey whole without spitting out the bones, Smok seems to have employed its impressive, serrated chompers to break those bones into bite-size bits before swallowing them — "somewhat reminiscent of a hyena," the researchers wrote.

Sometimes, it seems, those bones got the better of Smok. Among the shattered ribs and leg bones of lesser archosaurs present in Smok's poop samples, the researchers spotted fragments of sharp teeth that likely came from Smok itself. The researchers said this probably means that Smok's teeth were repeatedly crushed against the hard bones the predator was eating, and so the dinosaur sometimes accidentally ingested its own teeth along with its meal.

These bone-crunching dining habits add to the list of similarities between Smok and T. rex, a tally that also includes anatomical features like massive heads and bulky bodies, the researchers wrote. Smok was much smaller than T. rex; the most complete Smok skeletons measure an average of 16 to 20 feet (5 to 6 meters) in length, while the most complete T. rex skeleton measures twice as long. However, it seems that the two distantly related species occupied a similar niche as the top predator of their times.