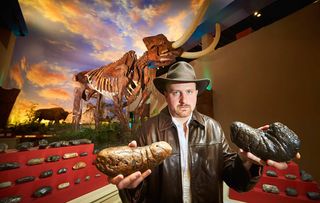 George Frandsen has been collecting prehistoric poo since he was a palaeontology student at college.
(Image: © Guinness World Records)

A collection of 1,277 pieces of prehistoric poop may not sound like something worth celebrating, but one man's stash of ancient feces has set a new Guinness World Record.

George Frandsen, from the United States, studied paleontology in college, which is when he began collecting fossilized poop. His collection now includes specimens from 15 states in the U.S. and eight countries worldwide. The 1,277-piece collection was documented at the South Florida Museum in Bradenton, Florida, earning Frandsen the Guinness World Record title for world's largest collection of coprolites, or fossilized feces.

"What got me interested in finding and collecting coprolites is the story they tell of prehistoric life and ecosystems," Frandsen said in a Guinness World Records video. "No other fossils can tell you so much as coprolites can." [Gallery of Wonders: The Weirdest World Records]

The collector explained that the poop fossils contain inclusions, or bits of what the animal had ingested. These inclusions can range from pieces of plants to bones and scales, and even sometimes teeth.

Frandsen said that though some people may be wary of a collection of poop, the coprolites are hard as a rock and don't smell.

The most prized piece of poop in his collection is known as "Precious." The mummified excrement is his largest "true-to-form" coprolite specimen, weighing more than 4 lbs. (1.92 kilograms), Frandsen said.

"Why I say true-to-form is because it still carries the original form from when it was made 20 million years ago," he said.

"Precious" is dated to the Miocene epoch, 23.8 million to 5.3 million years ago, and was found in South Carolina. A huge crocodilian species that measured around 20 feet (6 meters) long produced the prehistoric poop, according to the Guinness World Records.

Coprolites can range in value from a few dollars to many thousands of dollars, Frandsen said. For instance, in 2014, one of the longest-known coprolites sold at auction for more than $10,000. Frandsen said that size, distinct impressions, ripples and "the classic poo look" make a coprolite expensive or valuable.