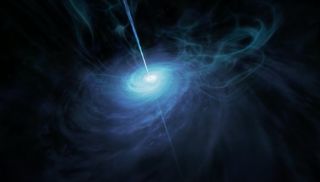 Astronomers have just discovered a galaxy with a supermassive black hole at its core, and it's located over 12.8 billion light-years away from Earth, just a billion years shy of the Big Bang. Known as a quasar, this object is the brightest of its kind ever seen in the distant universe. The discovery gives scientists a better look at the universe's early years and helps them understand how supermassive black holes form and evolve.

The newfound quasar, dubbed UHS J043947.08+163415.7, was discovered by taking advantage of gravitational lensing, a phenomenon in which a distant object's light is magnified by the gravity of a closer object. The intervening, or lensing, galaxy in this case makes the quasar appear 50 times brighter than it would otherwise. [Big Bang to Civilization: 10 Amazing Origin Events]

"The reason this one was discovered was — a bit lucky actually — because the quasar is so bright and the lensing galaxy is very faint compared to all the other lensing galaxies we know," lead author and astronomer Xiaohui Fan, of the University of Arizona, told Live Science. "That object had been sitting in the database for a few years now, but no one had looked at that part of the sky for quasars, because we usually don't."

The quasar was found in the constellation Taurus, which is close to the plane of the Milky Way galaxy. Astronomers generally avoid looking for quasars in this region, because the abundance of stars and dust there drown out the faint quasar light.

The quasar was first imaged in multiple colors by two all-sky surveys, the UKIRT Hemisphere Survey and Pan-STARRS1. Astronomers typically use computer algorithms that compare colors to identify high-redshift objects, those whose meaning light from these objects has shifted to the redder wavelengths of the spectrum as a result of moving away from us. If the lensing galaxy in this system were just half a magnitude brighter, researchers may have entirely missed the quasar. Fan said this kind of stringent color-selection criteria has likely caused other quasars to be overlooked.

"At such great distances, [quasars] are also extremely rare," said Laura Pentericci, an astronomer who studies distant galaxies at INAF Rome Astronomical Observatory but who was not part of the new study. For instance, despite searching for over a decade, astronomers have found only two quasars located more than 13 billion light-years away, Pentericci told Live Science. Luckily, the newly studied quasar and galaxy were just bright enough to be flagged as potential distant-universe objects. The astronomers next analyzed data showing the individual wavelengths emitted by the quasar. By analyzing these specific wavelengths of light, particularly one emitted by magnesium, the astronomers were able to confirm the quasar's distance.

Studies of early quasars give scientists insight into our universe's youth. Quasars are powered by black holes, so they can tell us when and how the first black holes formed. Quasars' intense light also acts as a beacon shining through intergalactic space. As a quasar's light travels toward Earth, that light passes through intergalactic gas, which absorbs specific wavelengths of the light depending on the gas's temperature and composition. Astronomers can then decode quasars' light to learn about the material located between galaxies that is much too faint to see directly.

The researchers in the new study are already working to learn more about this newfound quasar. They also plan to reanalyze older data to see if they missed other quasars.