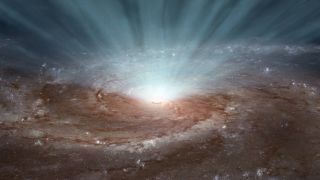 Supermassive black holes blast winds outward in a spherical shape, as depicted here in this artist's conception of a black hole.
(Image: © NASA/JPL-Caltech)

Very close to the very beginning, scientists think, there were black holes.

These black holes, which astronomers have never directly detected, didn't form in the usual way: the explosive collapse of a big, dying star into its own gravity well. The matter in these black holes, researchers believe, wasn't crushed into a singularity by the last gasps of an old star.

Indeed, back then, in the first 1 billion or so years of the universe, there were no old stars. Instead, there were huge clouds of matter, filling space, seeding the earliest galaxies. Some of that matter, researchers believe, clumped together more tightly, though, collapsing into its own gravity well just like old stars later did as the universe aged. Those collapses, researchers believe, seeded supermassive black holes that had no previous life as stars. Astronomers call these singularities "direct collapse black holes" (DCBHs).

The problem with this theory, though, is that nobody has ever found one. [The 18 Biggest Unsolved Mysteries in Physics]

But that could change. A new paper from the Georgia Institute of Technology published Sept. 10 in the journal Nature Astronomyproposes that the James Webb Space Telescope (JWST), which NASA intends to launch at some point in the next several years, should be sensitive enough to detect a galaxy containing a black hole from this ancient period of the universe's history. And the new study proposes a set of signatures that could be used to identify a DCBH-hosting galaxy.

And that ultrapowerful telescope might not have to search the skies for very long to find one.

"We predict that the forthcoming James Webb Space Telescope might be able to detect and distinguish a young galaxy that hosts a direct-collapse black hole… with as little as a 20,000-second [5.56-hour] total exposure time," the researchers wrote. (Later, they noted that there were some "crude" elements to that timing estimate.)

To make their prediction, the researchers used a computer model [CK?] to simulate the formation of a DCBH in the early universe. They found that when a DCBH forms, it causes a lot of huge, short-lived, metal-free stars to form around it. So the light coming from its host galaxy would contain signaturesof stars low in metal content.

They also found that an emerging DCBH emits particular, high frequencies of electromagnetic radiation that the JWST could recognize — though that radiation would have traveled so far, from a galaxy moving so fast in the opposite direction, that it would have redshifted into infrared radiation by the time it reached our solar system. (Light is redshifted, or shifts towards longer wavelengths, as objects in the universe move farther away from each other.)

And that gets to the underlying reason that researchers can still only speculate (in very advanced terms) about what a DCBH should look like to the JWST, and wait around for the JWST to actually arrive in space: To study the early universe, scientists have to look very far away, at very old light that has been traveling for a very long time. That light is especially faint, and without an instrument as sensitive as the JWST, humanity currently just doesn't have a way to detect it.

Once the JWST does launch, though, it should be able to detect a DCBH in relatively short order, the researchers wrote. That's because there are a lot of black holes that researchers can already detect from the slightly later universe that they suspect might be DCBHs. But those black holes are closer to Earth, so the signals that humanity can now detect from them were created later in their life spans, when evidence for how they formed has been lost.

There are a number of open questions about DCBHs that the JWST might answer, the researchers said in a statement— such as whether a DCBH forms and then causes a galaxy to form around it, or whether DCBHs formed after the matter around them had already clumped together into stars.

"This is one of the last great mysteries of the early universe," Kirk Barrow, the paper's first author and a recent doctoral graduate of Georgia Tech's School of Physics, said in the statement. "We hope this study provides a good step toward figuring out how these supermassive black holes formed at the birth of a galaxy."