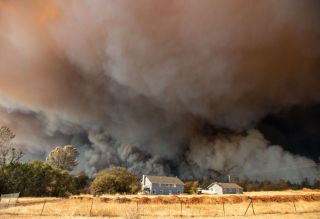 Smoke plumes from the Camp Fire tower over a home in Paradise, California, on Nov. 8.
(Image: © Josh Edelson / AFP)

As California's Camp Fire continues to burn and the smoke spreads across a large swath of the U.S., experts say that the biggest health danger from the smoke comes from the particulate matter that it contains.

Indeed, in terms of harm to human health, "the principal exposure from wildfire smoke is from the particulates," Dr. Jacqueline Moline, who specializes in occupational and environmental medicine at Northwell Health in New York, told Live Science.

Most of those health problems occur because the smoke from wildfires contains particles that are sometimes called "PM2.5," meaning particulate matter that is less than 2.5 micrometers in size. (For comparison, the average human hair is 70 micrometers in diameter.) [In Photos: Devastating Wildfires in California]

People who are exposed to wildfire smoke may develop a number of symptoms, including headaches; eye irritation; and irritation of the linings of their nasal passages, sinuses, throat and bronchi, said Moline, whose research has focused on the effects of toxins on health. When people are exposed to the particulates in the smoke, they cough, produce more mucus and experience nasal congestion.

And those are just the problems that otherwise-healthy people experience when they're exposed to this smoke. People who already have health problems can face other issues.

For example, there is clear evidence that wildfire smoke leads to a worsening of asthma and other chronic obstructive lung diseases, said Colleen Reid, an environmental health sciences researcher and assistant professor at the University of Colorado, Boulder. Studies show that people with these conditions are more likely to need to go to the emergency room or to use more of their prescription medicines when wildfire smoke is in the air, she said.

In addition, there is some evidence that people living in regions where fires tend to occur are more likely to die on days when there is smoke in the air than on other days, according to a 2016 study in the journal Environmental Health Perspectives that Reid led. But the researchers noted that more studies are needed to confirm this finding.

Some studies suggest that in addition to breathing problems, exposure to wildfire smoke may worsen cardiovascular or heart problems, Reid said.

But much of the research done to date has been on fires that occurred more distantly in the past. The fires that are currently burning and other fires in recent years have exposed people to much higher levels of smoke than typical fires that occurred longer ago, Reid said. For example, last year's Mendocino Fire, which raged for six weeks and burned 460,000 acres, and this year's Camp Fire have both had much higher impacts on the air quality in high-population areas than typical California fires in the past, Reid said. "It could be that once we look at the health effects of these fires, we may see they were worse, but we're not sure yet."

What is clear is that the level of particulate matter in the air during fires can be many times higher than the levels caused by other factors.

The problem with particulate matter

When the air quality is good, the small particulate matter levels are usually around 10 to 15 micrograms per cubic meter (ug/m^3), Reid told Live Science. When a meteorological "inversion" occurs, meaning warmer air that is usually high in the atmosphere moves closer to the ground where it traps air pollution, levels can rise to so that air quality exceeds the Environmental Protection Agency standard for PM2.5 of 35 ug/m^3. But wildfires can send levels above 200 ug/m^3. [8 Ways Air Pollution Can Harm Your Health]

"Those are really high levels," Reid said. "When you see the smoke and you can't see the horizon — that's a problem for health."

What's more, the chemicals that make up the particulate matter in wildfire smoke are often unknown.

Smoke from wildfires is typically a mixture of gases and particles from burning trees and other plant materials, said Dr. Antonio Rodriguez, director of the division of pulmonology at Nicklaus Children's Hospital in Miami. But if a fire involves other materials, like those found in a house, toxic gases and vapors can be released. These compounds can remain on the surface of the particles and be carried into the lungs. Such compounds can be very harmful and may injure the lungs, causing cellular damage and fluid buildup in the areas around the lung tissues.

When smoke enters the lungs, it triggers a defense mechanism that involves the release of chemicals called cytokines, which induce inflammation, Moline said. This inflammation may start small, in cells that line the lungs, but it can lead to a body-wide inflammatory response. People may then develop an increased susceptibility to infections, and individuals with allergies may have worsened allergic reactions.

Rodriguez also noted that small particulate matter is not only able to enter the lungs and cause significant respiratory symptoms, but is also small enough to pass through the lung tissue and enter the bloodstream.

Rodriguez, who has treated many children exposed to smoke produced by wildfires in the Everglades in Florida, said that young children, older adults and pregnant women may be particularly affected. Smoke causes kids to have itchy eyes, sore throats, headaches and occasionally even nausea, he said.

People who live far from the current fires, however, are unlikely to have negative health effects from the blazes, Reid said. The levels of particulate matter are usually not high enough to cause health problems in places that are distant from the fires, she said.

Editor's note: This story was updated at 1:20 p.m. ET to correct the abbreviation for micrograms per cubic meter, as well as clarify a quote from Colleen Reid about the effects of a meteorological "inversion" on air quality.