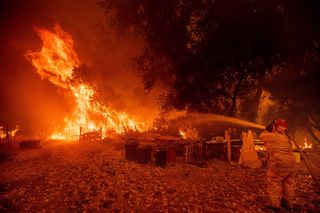 A firefighter douses flames while battling the Ranch Fire near Clearlake Oaks, California, on Aug. 4, 2018. The Ranch Fire is part of the Mendocino Complex, which is made up of two blazes: the River Fire and the Ranch Fire.
(Image: © Noah Berger/AFP/Getty Images)

California is battling its largest wildfire ever recorded, along with 15 other major ones across the state.

The Mendocino Complex Fire is actually two separate fires, both of which began burning in late July: the Ranch Fire and the River Fire. They haven't merged yet, but they are close enough to each other that officials from the California Department of Forestry and Fire Protection are counting them as one huge wildfire. [In Photos: The Deadly Carr Fire Blazes Across Northern California]

As of the morning of Aug. 7, the Mendocino Complex Fire has burned 283,800 acres (115,000 hectares) of land in northern California around Clear Lake and is only 30 percent contained. Fueled by high temperatures, low humidity and wind, the fire has destroyed nearly 170 homes and other structures, according to The Washington Post.

Although fires typically calm down at night because temperatures decrease and humidity increases, the Mendocino Complex Fire has continued to grow by thousands of acres regardless of the time of day, according to the Los Angeles Times and the Post.

The Mendocino Complex Fire bumped down the last record holder — the Thomas Fire, which burned 281,893 acres (114,078 hectares) of southern California just eight months ago — to become the largest California wildfire to date. In fact, four of California's five largest wildfires have occurred since 2012, according to the LA Times.

Meanwhile, the ongoing Carr Fire has killed seven people and burned 164,413 acres (66,535 hectares) in Shasta and Trinity counties in northern California as of Monday (Aug. 6) and is only 47 percent contained.

More than 14,000 firefighters are working to control the flames across the state, according to the San Jose Mercury News. But it doesn't stop with California. This year, extreme wildfires have ravaged other countries across the world, from Greece to Sweden, and scientists are blaming climate change, which exacerbates such extreme weather events that can fuel the fires, according to a previous Live Science report.