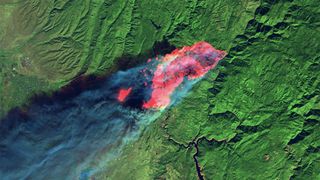 This satellite image, captured on Nov. 8, 2018, by Landsat 8, shows short-wave infrared (red), which gives the full extent of the actively burning area of the Camp Fire, just four hours after it started. The red patches are fires that leapfrogged in front of the primary burn front.
(Image: © Earth Engine image by Jeff Chambers)

At least 66 people are dead and more than 600 missing after California's Camp Fire destroyed the town of Paradise on Nov. 8.

Now, a new satellite view shows the beginning of the horror. The imagery, quilted together by University of California, Berkeley, geographer Jeff Chambers, shows the fire just 4 hours after it ignited. The fast-moving blaze had already burned half of Paradise when the images were taken.

The Landsat-8 satellite happened to be orbiting over northern California at 10:45 a.m. local time on Nov. 8. The fire, which began around 6:30 a.m., is visible in infrared — which captures the heat of the flames — as a red blur spilling over the landscape. [See Photos of the Deadly Camp Fire]

"It's astonishing," Chambers said in a statement. "You can see the fire burning right through the city."

The satellite's visible-light images captured other views, these showing the billowing gray smoke. They give a sense of the fire's scope, but they obscure the location of the actual flames. The infrared data revealed how the fire moved through the buildings of Paradise, Chambers said.

"At 10:45 in the morning, all these structures were engulfed in flames," he said. "You can see that clearly in the image and start counting the hundreds of homes burned."

The data suggests that the fire was chewing up territory at a rate of about 3 mph (5 km/h) during the first 4 hours, Chambers found. It was not a predictable march: Flying embers from ignited spots shot far ahead of the advancing front. Survivors who fled the flames reported that they'd break free of one burning area, only to hit additional lines of fire in their paths.

The Camp Fire has burned more structures than any wildfire in California history and has incinerated 142,00 acres, according to Cal Fire. As of 7 a.m. local time on Nov. 16, the fire was 45 percent contained, with more than 5,500 personnel working to mitigate the disaster.