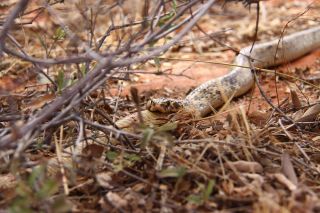 Like long, meaty noodles, snakes can fit comfortably into the mouths, throats and serpentine digestive tracts of most animals quick enough to catch them. If your body has evolved to ignore their potent venom (human bodies have not; don't swallow snakes), then snake eating, or "ophiophagy," can provide a fine source of relatively low-cost energy. Birds do it. Mongooses do it. Even other snakes do it — kind of a lot.

Bryan Maritz, a senior lecturer at the University of the Western Cape in South Africa, knew this before he and his colleagues started studying cobras in Africa's Kalahari Desert. But even they were surprised when they witnessed a long, yellow cape cobra devouring another cobra of the exact same species last spring. [Photos: Top 10 Deadliest Animals]

"We were greeted not by two males in ritualized combat as initially expected, but rather by a large male cape cobra in the process of swallowing a smaller male [of the same species]," Maritz and his colleagues wrote in a new study published Oct. 1 in the journal The Scientific Naturalist. "Instead of capturing two potential study animals, we found one well-fed study animal, now known as NN011, or more casually, Hannibal."

Aside from the absence of fava beans and Chianti, Hannibal's dining preferences got the researchers wondering: Do snakes cannibalize their own kind regularly?

While cobra cannibalism has been recorded several times in previous studies, the authors wrote, it's typically dismissed as anomalous behavior rather than taken as evidence of a broader trend. To test whether such a cannibalistic trend might exist, Maritz and his colleagues compiled a comprehensive dietary history of six different species of African cobras. In addition to observing wild snakes like Hannibal, the team dug into decades of scientific literature, herpetology newsletters, museum bulletins and social media posts, looking for mentions of snake-on-snake consumption.

It turned out that ophiophagy is common among cobras. (The king cobra, or Ophiophagus Hannah, is literally named for this behavior.)

"We found that snakes account for 13 [to] 43 percent of all prey species detected in the diets of wild cobras," the authors wrote in the study.

What's more, there was a considerable amount of cannibalism, or eating an animal of the same species. Of the six studied cobras, five have been observed eating their own kind. Cape cobras (a yellow-colored cobra found only in southern Africa) proved the most cannibalistic of the bunch. In a sample of 148 cape cobras, the snakes opted to cannibalize their own for roughly 4 percent of their meals, preferring to chow down on other cape cobras over all other snake species except one.

Why might this be? Researchers can only speculate for now, but Maritz and his colleagues suspect it might have something to do with sexual competition. That's because, in every cannibal event they observed, both the diner and the dined-upon loser were males. Perhaps this (actually) toxic masculinity resulted from a fight gone too far, or perhaps it was a deliberate attempt to weed out sexual rivals? Only more research will tell. Luckily, it's a snake-eat-snake world out there, so there will be plenty of opportunities to find out.