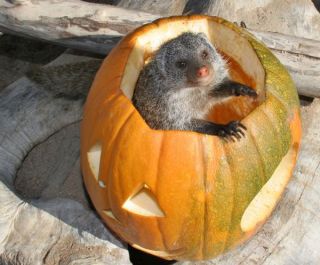 Mongooses are long, furry creatures with a pointed face and a bushy tail. Despite popular belief, mongooses are not rodents. They are members of the Herpestidae family, which also includes civets and meerkats.

There are 34 species of mongoose in 20 genera, according to the University of Michigan's Animal Diversity Web (ADW). With so many different types of mongoose, sizes vary greatly. Their bodies range from the dwarf mongoose at 7 inches (18 centimeters) long to the Egyptian mongoose, which is 2 feet (60 cm) long, according to National Geographic.

Most species of mongoose are found in Africa, but some also live in southern Asia and the Iberian Peninsula, according to National Geographic. Some species of mongoose have been introduced into other areas of the world, such as Caribbean and Hawaiian islands.

Mongooses live in burrows made of a complex system of tunnels or in trees in many different types of landscapes, including deserts and tropical forests. The bushy-tailed mongoose, for example, lives in lowland forests near rivers. The Gambian mongoose lives in areas with grasslands, coastal scrub and forests.

Banded mongoose colonies live, travel and fight together as a team. They stay in one area for around a week, then move in a wave to another location, much like a flock of birds when they migrate, according to Animal Planet.

Mongooses are active during the day and sleep at night. Throughout the day, they chatter incessantly to each other, and combine discrete units of sound somewhat like human speech, using vowel and syllable combinations to possibly coordinate group movements, foraging information and other important messages.

Mongooses are omnivores, which means they eat both meat and vegetation. Typically, they prefer to eat small animals such as birds, reptiles, fish, snakes, crabs, rodents, frogs, insects and worms. They will also supplement their diet with eggs, nuts, fruits, roots, berries and seeds. To get into eggs, mongooses are known to crack the eggs against hard objects, according to National Geographic.

There hasn’t been much study on the reproduction habits of the mongoose. It is believed that mongooses breed during March to May and October to December, according to ADW. Mongooses have gestation periods of 42 to 105 days and give birth to one to four offspring at a time.

Baby mongooses are called pups and a group of offspring is called a litter. It is believed that mongooses become fully mature between 9 months to 2 years of age and live from 6 to 10 years in the wild.

Here is the taxonomy of the mongoose, according to the Integrated Taxonomic Information System (ITIS):

According to the International Union for Conservation of Nature (IUCN), most mongoose species are listed as threatened, but not extinct.

Ironically, in the 1800s mongooses were introduced to Hawaii and the West Indies to control rodent populations at sugarcane plantations. This introduction in turn caused many species of birds and other animals to almost become extinct.  In fact, the small Asian mongoose is listed as one of the world's 100 worst invasive alien species.

Some mongooses are legendary snake fighters. The Indian gray mongoose is particuarlly known for its fondness of fighting and eating poisonous snakes, such as cobras. "Rikki-tikki-tavi" is a short story by Rudyard Kipling about a young mongoose that fights a cobra.

Mongooses can live for up to 20 years in captivity, according to National Geographic.

Indian mongooses groom each other.