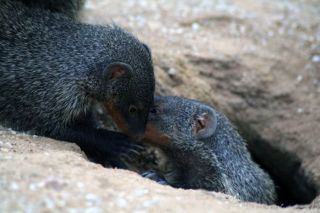 Researchers found that the single-syllable call of the banded mongoose is actually structured, and perhaps like the vowel and consonant system of human speech.
(Image: © University of Zurich)

While some animals like birds and whales are famous for their impressive repertoire of information-packed songs, banded mongooses blurt out short grunts that, to human ears, sound rather unsophisticated.

But a closer examination of mongoose calls has revealed that these animals might be more eloquent than previously believed. In fact, researchers say the creatures combine discrete units of sound somewhat like humans put together a consonant and vowel to form a syllable.

"The fact that such findings were done in a 'simple' species as the banded mongoose rather than in primates or apes could be revealing," researcher David Jansen, of the University of Zurich, told LiveScience in an email.

The results suggest that the "simple" calls of other species — like frogs and bats — might actually contain vocal cues with more complex encoding.

For the study, Jansen and his colleagues followed around banded mongooses (Mungos mungo) in western Uganda, inside of Queen Elizabeth National Park. The small carnivores are related to the meerkat and found in the savannah regions south of the Sahara Desert. They live in social groups of about 20 adults that raise their young cooperatively. Their calls, which last between 50 and 150 milliseconds and can be considered to represent a single "syllable," allow them to maintain group cohesion and coordinate activities like foraging.

The researchers recorded the animals' calls to each other, noting what the creatures were doing at the time (i.e. digging, searching or moving). The team found subtle vocal signatures within the single syllables of the calls. There's an initial sound that seems to provide information about the identity of the caller and a second sound (which Jansen compared to a vowel) that indicates the caller's current activity. [See Video of Mongoose 'Talking']

"It shows that banded mongooses combine vowel-like segments in a way that was thought to be unique to human speech," he added, noting that such elements might be found in the calls of other animals that speak to each other in single syllables.

"We think it is present in other species, and future research should attempt to find these," Jansen wrote, citing frogs and bats as possible candidates.

The research was detailed online last month in the journal BMC Biology.