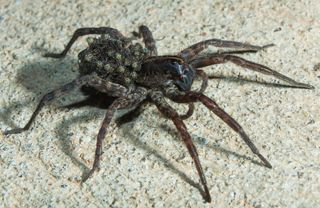 A female wolf spider carries her babies on her back.
(Image: © IrinaK | Shutterstock)

Eating your offspring may sound unthinkable, but animals from fish to birds are known to do it. Scientists have been unsure why such a behavior would have evolved, but a new study sheds light on the factors that may drive some parents to eat their young.

Zoologists have observed filial cannibalism, the act of eating one's offspring, in many different types of animals, including bank voles, house finches, wolf spiders and many fish species. Paradoxically, all of the species also care for the young that they don't eat.

Scientists were hard-pressed to explain how such seemingly opposing behaviors could co-exist in the same species and reasoned that there must be some evolutionary benefit to the practice.

"If it doesn't confer some sort of benefit, you wouldn't expect it to have evolved," said the study's lead author Hope Klug, a graduate student at the University of Florida.

Previous studies have focused on the idea that parents might be eating their own eggs because they get an energy benefit from it and might be using it as a source of food when other sources were scarce. But studies of some fish that had their diets supplemented by researchers came back with mixed results: While some stopped eating their offspring, others didn't.

"It's not just about getting an easy meal," Klug said.

To test other possible motivations, Klug and colleague Michael Bonsall at the University of Oxford modeled different scenarios of "virtual organisms" with a computer, where filial cannibalism was introduced into populations of animals that cared for their young. The results of their study, funded by the Royal Society in England and the U.S. National Science Foundation, are detailed in the December issue of the journal The American Naturalist.

They found that several factors contributed to parents developing a taste for their own offspring. In some cases, cannibalizing their own young puts the same evolutionary pressure on the eggs that a predator would: the faster the eggs develop, the greater their chances of survival.

Cannibalism was also found to increase the parent's reproductive rate by apparently increasing mate attractiveness, though Klug says they're unsure as to why this might be. Some energy benefit to eating the eggs was also observed, but no one benefit alone accounted for the spread of filial cannibalism through the population.

"You can't explain filial cannibalism in all of these animals with just one benefit," Klug said.

Klug said filial cannibalism could be a way to root out offspring that take too long to mature and therefore require a little too much parental care—this strategy would conserve the parents' energy for subsequent, faster-developing batches of young.

"They initially overproduce offspring and then later remove some of the inferior offspring," Klug explained.

General competition within a species for resources may also limit parents to the amount of energy and time they can spend raising their young, so they force their eggs to grow up fast or get eaten.