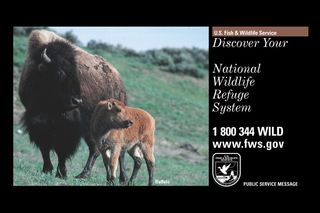 Something strange happens when it rains in Kruger National Park in South Africa: Buffalo mothers give birth to more sons. Now, scientists think they know why — it's in their genes.

The results from a new study suggest that certain genes in male buffalos distort the genetic material in their sperm so that they father only sons. And these genes are "turned on" when there's plenty of grass to chow down on, as happens during the rainy season.

However, there appears to be a few systems in play so that overall, the proportion of males to females tends to even out. For one thing, the males with these sex-distorting genes are usually less fertile than other males. Another possibility is that a different set of genes, triggered by the dry season, influence the resulting brood so that there's slightly more females.

If true, the findings would be the first evidence of so-called sex-ratio genes in large mammals. These genes have so far only been observed in insects, such as files, and in rodents.

The findings suggest that sex-ratio genes might be present in more animals than scientists have suspected, and perhaps even in humans, according to study researcher Pim van Hooft of Wageningen University in The Netherlands.

"I think it's not unique for the buffalo," van Hooft said.

Sex-ratio genes are located on the chromosomes that determine an animal's gender. Chromosomes are packets of DNA inside a cell's nucleus. In buffalo and people, one pair of chromosomes, called the X and Y chromosomes, are considered sex chromosomes.

Each parent provides one sex chromosome to the offspring, with males giving either an X or Y and females giving only X chromosomes. Offspring with XX become female and those with XY become males.

Van Hooft examined blood samples collected from buffalo during 1998. Because the samples included the age of the animal, he was able to go back in time, looking at the genetics of buffalo that varied in ages from 0 to 15 years.

What he found was quite strange. The amount of genetic variation on the Y chromosome was surprisingly different between buffalo of different ages, even if they were only a year apart. It was as if there were two different types of Y chromosomes, and the ratio of these Y-chromosome types fluctuated from season to season, and also from year to year.

Normally, you would expect buffalo that were so close together in age to have very similar Y chromosomes, van Hooft said. After all, it's the same parent generation producing the kids for quite a few years, and shifts in the population genetics just don't happen that fast.

He also saw that the number of males and females born during each season was slightly skewed. During the rainy season, the ratio of males to females was about 53-to-48, so if there were 100 buffalo babies born, 53 would be male and 48 female on average. The reverse was seen in the dry season, with relatively more females born.

Van Hooft reasoned that sex ratios were at play, and that they were triggered by environmental conditions, which in turn affected the sperm.

"Apparently, these sex-ratio genes are triggered by the body condition, or the semen quality," van Hooft told LiveScience.

Here's what could be happening:

Some sex-ratio genes are turned on by the wet season, causing some male buffalo in the population to produce only sons. This increases the proportion of males in the population, and the Y chromosomes from those males would be overrepresented.

During the dry season, a different set of sex-ratio genes could be turned on, ones that had the opposite effect. The final result is an increase in females, along with a fluctuation in Y chromosome types.

Since these genetic influences on the whole balance out, it means that scientists could easily miss the presence of these sex-ratio genes unless they look at the actual variation in the genes of a population.

Van Hooft thinks it's possible that we could even find such genes in humans, since some studies show a seasonal variation in sex ratio in certain populations, he said.

"They have difficulty figuring out how to explain this [seasonal variation] pattern" van Hooft said. "My study indicates, maybe these seasonal variations are also the result of some sex ratio genes, only we did not look at it yet, for such effects."

The results are published in April 23 in the journal BMC Evolutionary Biology.