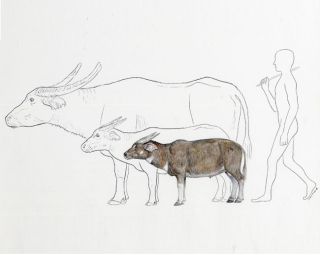 The bones of an extinct dwarf species of buffalo were recently unearthed on the Philippine island of Cebu.

Dubbed Bubalus cebuensis (BOO-buh-luhs seh-boo-EN-sis), the miniature buffalo [image] stood at just more than two feet, three times smaller than today's domestic buffalo, and weighed a mere 350 pounds. It probably lived during the Pleistocene (Ice Age) or Holocene Epochs, between 10,000 and 100,000 years ago.

The finding, detailed in the October issue of the Journal of Mammalogy, is the first well-supported example of "island dwarfing" among cattle or their relatives and could have implications for the current debate about Homo floresiensis, a recently discovered hominid that some scientists say is a new dwarf species.

Fossils are rare in the tropical environments of the Philippines, a region lacking open rocky patches where fossils are often buried and preserved, and this is the first fossil mammal of any age reported from Cebu Island. The fossil remains were found 50 years ago in a phosphate mine by engineer Michael Armas. Nearly four decades later, he showed them to physician Hamilcar Intengan, who recognized their importance and brought them to The Field Museum for study in 1995.

Scientists, including paleontologist John Flynn of the American Museum of Natural History in New York, examined the partial skeleton, which included two teeth, two vertebrae, two upper arm bones, a foot bone [image] and two hoof bones. The species had relatively large teeth, which is typical of island dwarfs, but also relatively big feet, which are generally reduced along with other body features in dwarfing.

"The reason that might be is because evolution actually works in different ways--we call it mosaic evolution--that not all features change in exactly the same way all the time. For whatever reason, this particular species didn't reduce the foot proportions the same way that dwarfs of other species on other islands might have," Flynn told LiveScience.

The finding supports the idea that the earliest water buffalo were large and first evolved in Southeast Asia. The animals likely traveled from the mainland to the Philippine islands when sea levels dropped roughly 400 feet during the peak of the "Ice Age" about 20,000 years ago.

Less food was available on the islands and the buffalos might have shrunk to compensate, Flynn said. That could be why this buffalo is smaller than two living related species--a domestic buffalo (Bubalus bubalis) and the tamaraw (Bubalus mindorensis).

The tamaraw is also a dwarf and lives only on the Philippine island of Mindoro. At about three feet tall at the shoulder and 500 pounds, it is much larger than the newly discovered species. The researchers speculate that the new dwarf buffalo was smaller than tamaraw because it roamed an even smaller island that had less food.

In combination with the tamaraw on Mindoro and a report of buffalo fossil teeth found on another Philippine island, Luzon, the new discovery indicates this genus might have once lived throughout the Philippines, most of which is an oceanic archipelago, never connected to any continental land mass.

The research could provide insights into debates on the evolution of small-bodied species elsewhere in the tropics such as the proposed new hominid, Homo floresiensis, found on the Indonesian island of Flores in 2003.

While Flynn doesn't have sufficient knowledge of the dwarf hominid, the new discovery does support the validity of dwarf island species in general--indirectly lending weight to the dwarf hominid. If a buffalo could shrink, why not a hominid?

"This discovery emphasizes that it's not all that uncommon to find dwarf species evolving on islands," Flynn said.