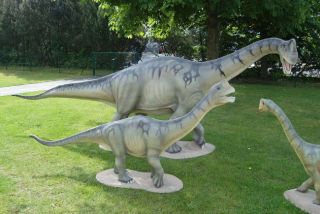 Scientists have unearthed what they consider to be a dwarf species of dinosaur. The beast was still bigger than a horse.

On a dig in northern Germany, researchers recovered bones from 11 individuals of a new dinosaur species. The specimens belonged to the dinosaur family Sauropoda, which includes some of the largest beasts ever to walk the planet. This giant group also includes Brachiosaurus, Diplodocus, and the largest of them all, the 120-foot long Argentinasaurus.

The skeletons of the newfound dinosaur, Europasaurus holgeri, ranged from about 5 to 20 feet long from head to tail. It was slightly taller than an adult human [see drawing] and its entire body wasn't even as long as the elongated neck of another sauropod, Erketu ellisoni.

The team originally thought they were dealing with juvenile dinos, but closer inspection of the bones revealed the beasts were dwarfed adults. The researchers compared the bones with those of large-bodied sauropods and suggest that the diminutive species evolved through a rapid decrease in growth rate from its larger ancestor.

During late Jurassic times , about 155 million years ago, Germany and the rest of central Europe were submerged beneath a warm, shallow sea. Most of the fossilized dinosaurs discovered in this region and dating to the late Jurassic, including the newfound dwarf, probably lived on islands.

Being tiny dinos might have been advantageous. The researchers speculate that an island lifestyle, which combines physical isolation with limited resources, might have favored the survival of smaller dinosaurs with lesser appetites.

The dwarf had a crest on the top of its head, a feature common among several dinosaur species that's function has sparked debate among scientists. Two prevailing thoughts are that it was used to produce mating calls or as a visual cue for species identification or mate attraction.

The newfound species is detailed in the June 8 issue of the journal Nature.