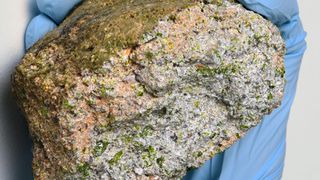 The NWA 11119 meteorite is about the size of a baseball and is estimated to be 4.6 billion years old.
(Image: © UNM Newsroom)

Approximately 4.5 billion years ago, the catastrophic explosion of a massive star, a supernova, caused an immense cloud of cosmic dust and gas to come together and form our solar system. But exactly how the planets were built remains somewhat of a mystery to scientists.

Now, a newly discovered, 4.6-billion-year-old, sparkly, green meteorite that formed just before that explosion is helping scientists learn more about how the solar system's planets were pieced together.

The remarkable, baseball-size space rock, called Northwest Africa (NWA) 11119, was acquired by a meteorite dealer in Africa in 2016. That dealer sent the specimen to Carl Agee, a planetary geologist and meteorite curator at the University of New Mexico. Agee wasn't sure if the rock was a meteorite (which would mean it came from space), so he asked his doctoral student Poorna Srinivasan to analyze the object. [Photo Gallery: Images of Martian Meteorites]

At first, both Agee and Srinivasan were skeptical that the rock had come from beyond our planet. "We did not think this rock was a meteor at all. We thought it was from Earth," Srinivasan told Live Science. But after closer examination, she said, "we saw that this could, in no way, be from Earth." While the rock closely resembled volcanic rocks on Earth, its chemical composition indicated it was definitely from space, and it wasn't just an ordinary meteorite, the researchers found.

Large silica crystals, called tridymite, account for about 30 percent of NWA 11119. That amount of tridymite is comparable to what's found in volcanic rocks on Earth, but it's unheard of in meteorites, Srinivasan said in a University of New Mexico statement.

Overall, the composition of NWA 11119 is strikingly similar to the material that makes up Earth's crust, the outer layer of rock that forms a solid shell around the planet. That's why the researchers suspect that NWA 11119 is a crustal rock from an asteroid with a crust layer that formed in a way similar to how Earth's crust formed.

Additional chemical analyses revealed that the meteorite closely resembled two other unusual meteorites — NWA 7235 and Almahata Sitta — suggesting that all three space rocks may have come from the same parent body, Srinivasan said.

There is still much scientists don't understand about how planets are built, but a discovery like this one can help researchers understand "what an earlier version of Earth might have looked like," Srinivasan said.

"There's still so much to learn about how Earth's crust could have formed," she said. "We just scraped the surface here."

Srinivasan is the lead author on the study describing NWA 11119, published yesterday (Aug. 2) in the journal Nature Communications.