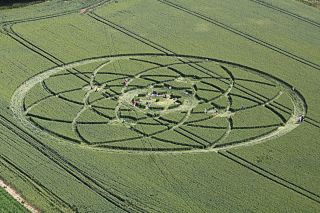 Sunbathers flock to a crop circle in a farmer's field on July 15, 2013, in Wiltshire, England. The crop circle measures about 500 feet (150 meters) across and lies east of Hackpen Hill, a spot known for its crop circles.
(Image: © Lucy Pringle/Barcroft India/Barcroft Media via Getty Images))

Editor's note: Dr. Paul Kingsbury presented some of his research on crop circles on Nov. 2 at the Department of Geography, Simon Fraser University.

Crop circles are some of the most beautiful, mysterious and controversial landscape phenomena in the contemporary world. They are found around the globe, appearing in countries with large areas of agricultural land. They are also central to a shift in culture with investigative approaches that mimic science and increasingly make the paranormal mainstream.

Unlike UFOs, ghosts and sasquatches, crop circles are tangible — people can touch and walk into them. At least 30 appeared in England last summer. In British Columbia, crop circle formations appeared in Vanderhoof, about 100 kilometres west of Prince George, in 1998 and 2001.

Crop circles and what people do with them represent one aspect of my ongoing four-year research project, which explores the recent growth of beliefs, practices and experiences related to the paranormal. My fieldwork studies investigative paranormal groups in the Vancouver area and paranormal conferences across North America and England.

Recent literature in the social sciences on paranormal cultures argues that despite the rise of a secular, post-religious society, paranormal discourses are becoming increasingly significant in people's lives in the West.

Because the paranormal refers to "events or phenomena… that are beyond the scope of normal scientific understanding," researchers have long acknowledged that the paranormal intersects with "normal" everyday life.

Recently, however, as a result of a paranormal influence in popular culture, the rise of new spiritualities and commodities associated with them — such as cauldrons, healing crystals and online psychic services — researchers have begun to question describing interest in the paranormal as subcultural or countercultural, rather than mainstream.

Investigative organizations and international conferences that mobilize paranormal feelings, knowledge and practices are central to the merger between the paranormal and the mainstream.

Drawing on the models and techniques that mimic conventional science, these conferences and organizations are open to the public and have led to the democratization of paranormal investigation and availability of paranormal experiences.

Researchers — especially in the humanities — acknowledge the relevance of the paranormal. Yet enduring skepticism in the social sciences about the legitimacy of the claims about paranormal phenomena and experiences has resulted in a lack of critical studies on how people are actually engaging with the paranormal.

Academic research has already acknowledged the importance of local paranormal groups and international conferences that engage paranormal phenomena — in particular ghosts, UFOs and cryptids such as sasquatch. Yet we know very little about the relationships between these groups and conferences, as well as why and how they shape people's everyday lives.

My study helps explain how paranormal organizations and conferences are contributing to these sociocultural changes.

Crop circle research or "cereology" exemplifies the tension between the ordinary and extraordinary.

No matter what one understands to be the cause of crop circles, whether they are all human-made or involve aquifers, ley lines, divine feminine energy, ancient sacred sites, ball lightning or even UFOs, crop circles bring to the fore a mysterious disconnection between language and the visible, as described in Jean-François Lyotard's book Discourse, Figure.

The French philosopher argues there is an unstable relationship between linguistic meaning and units of signification, that is, the visible patterns of words, dreams, symbols and visual art. Because there is no inherent meaning in any given signifier (meaning always relies on another word and a wider context), and art and symbols are conceptually opaque by default, they necessarily defy easy rational understanding.

One day during the conference, I went to visit a crop circle with fellow researchers only to find a sign on a gate to the property: "Crop circle closed." The person representing an organization that liaises between farmers and crop-circle researchers was not present. Because we could not proceed without trespassing, we got back into the car.

Back at the conference, an argument erupted over the behaviour of some researchers who had ignored the "Crop circle closed" sign, climbed over the fence and walked to the crop circle.

For one researcher, this transgression was troubling because it exhibited the crass consumption of what he believed was a sacred phenomenon. Another researcher, who had ignored the sign, replied that he respected this opinion, but felt the crop circle was "calling out" to him and that it would be more disrespectful to ignore the pull of the sacred.

The researchers had differing views on whether a "Crop circle closed" sign, which demarcated a boundary, should be obeyed or whether it was an inappropriate obstacle to the "call" of the crop circle.

The tension between the appearances and meanings of crop circles also informed the tricky patience demanded in a sacred geometry workshop. As participants drew lines with compasses and protractors, they struggled to accurately reproduce the complex patterns of crop circles, losing small pieces of pencil lead and struggling to keep their compasses from slipping on the paper. Conference organizer Karen Alexander said the exercise gave the participants a better appreciation and intimate understanding of crop circles.

As a part of my work, I explore the tensions between the visual and language, focusing on the complexity of crop-circle landscapes where enthusiasts struggle to navigate toward, inside and away from crop circles.

Lyotard aligns these events with "figural space" — elusive elements that disrupt and exceed the capture of language. Crucial here is how crop circles — unlike ghosts, UFOs and sasquatches — are highly tangible signs. But what they mean and what they are remains a mystery.

Despite claims by "circle-makers" that they are human-made, the sheer size and complexity of the circles belies a 100 per cent human-made explanation.

According to researchers at the conference, hoaxers, when questioned about how they were able to make 80 or so perfectly round circles without breaking or snapping cereal stalks, are unable to reproduce the patterns and ignore the researchers' questions.

Furthermore, finding and getting to the crop circles — navigating narrow and winding English countryside roads and locating their exact whereabouts in large fields of wheat or barley — is no small feat.

Like all the other paranormal investigation cultures I have studied so far, crop circle research blurs the distinction between the everyday and the extraordinary. Beyond this, one cannot discount the importance of geography in the micro-spaces of fields and conference venues. The regional nature and extent to which crop circles are landscape phenomena incites many people's desire to shape their encounters with the sublime.