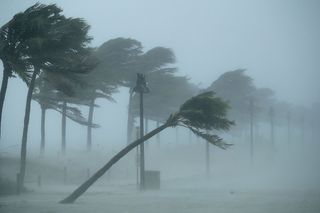 Irma struck the U.S. mainland today (Sept. 10), making landfall in Florida at 9:10 a.m. local time as a Category 4 hurricane, and experts predict that Irma will remain a hurricane though the morning of Sept. 11 and perhaps longer.

After hitting Cudjoe Key in the Florida Keys, Irma moved toward Florida's southwestern coast. The storm departed the Keys at 12 p.m. local time and made a second landfall at 3:35 p.m. in Marco Island, Florida, with wind gusts up to 130 mph (209 km/h) and maximum sustained winds of 115 mph (185 km/h), the National Hurricane Center (NHC) reported.

While Irma's passage over land will cause the storm to weaken somewhat, Irma's present size and power — it had maximum sustained winds of 110 mph (175 km/) as of 5 p.m. EDT — suggest that the storm will retain hurricane strength until Monday morning "at the earliest," NHC representatives said in an advisory. And as Irma continues to track northward, dangerous wind conditions will extend into Georgia, Alabama, Tennessee and the Carolinas over the next few days, according to the NHC. [Hurricane Irma: Everything You Need to Know About This Monster Storm]

The storm's northwestern track is expected to carry Irma over or near the western coast of Florida Monday morning, bringing the hurricane inland and into southwestern Georgia on Monday afternoon, the NHC said.

Images and video from southern Florida that were posted on social media on Sept. 10 showed evidence of Irma's power — trees lashing violently back and forth in the wind, boats smashed into ruined docks, waterspouts and tornados forming on the horizon, and waves of water sweeping across roads. A tweet by WFLA reporter Josh Benson included footage shot by Miami business owners while inside their store, showing the view through the window — they were surrounded by a wall of water that appeared to be several feet deep.

A video clip of downtown Miami — located more than 100 miles (160 kilometers) from the eye of the storm at the time — demonstrated how devastating Irma could be, with choppy waves roiling over the empty streets and spray whipping into the air, in a scene resembling "a watery war zone," Brian Kahn, a science writer with Climate Central, wrote on Twitter.

Irma's landfall only marked the beginning of Floridians' woes — over the next few days, heavy rainfall and flooding are expected to saturate portions of southeastern Florida, the NHC announced in a tweet. Total rainfall in the Florida Keys could add up to as much as 25 inches (64 centimeters) in some areas, with as much as 20 inches (51 cm) on the western peninsula and up to 16 inches (41 cm) on the eastern peninsula, the NHC reported.

Storm surges from Irma combined with normal tidal activity will bring significant flooding to normally dry areas in coastal Florida, the NHC warned in the advisory. If peak surges coincide with high tide, the incoming water could reach heights of up to 10 feet (3 meters) in the Florida Keys, as much as 8 feet (2.4 m) in Tampa Bay and up to 5 feet (1.5 m) in Miami Beach, the NHC reported.

Once Irma departs Florida, Georgia and parts of the Carolinas could see as much as 12 inches (30 cm) of rainfall, with southeastern Georgia receiving up to 16 inches; drenching rains in all of those areas could lead to life-threatening flash flooding, according to the NHC.