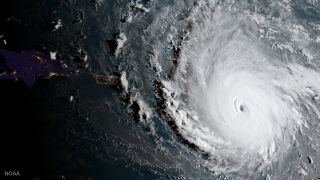 The GOES-16 satellite captured this geocolor image of Hurricane Irma on the morning of Sept. 5. The Category 5 hurricane made landfall in the Caribbean and still poses a threat to the U.S. Virgin Islands, Puerto Rico and possibly Florida.
(Image: © NOAA)

With so much online news and the smattering of social media posts on the formidable Hurricane Irma, you may find yourself at a loss for how to keep up with this Category 5 storm as it barrels toward Puerto Rico and possibly Florida.

Enter researchers at the National Oceanic and Atmospheric Administration (NOAA), meteorologists and other experts around the world who are tracking the storm. Here's how to keep tabs on what they post online, so you can keep on top of Hurricane Irma updates.

One of the best places to check is NOAA's National Hurricane Center (NHC), based in Miami. The NHC is posting weather imagery and written advisories about Irma and other active wind storms every few hours throughout the day. [Hurricane Irma Photos: Images of the Monster Storm]

For instance, today (Sept. 6) the NHC released several images, including illustrations showing Irma's wind speed probabilities, a timetable of when it's expected to hit the landmasses in its path, the hurricane's wind history and interactive maps showing hurricane warnings. This morning, the NHC also reported that Irma is moving about 16 mph (26 km/h) toward the Virgin Islands, and has wind speeds near 185 mph (295 km/h), with higher gusts.

The internet is also awash in webcam footage, so people can watch the hurricane live — that is, unless high winds or floods disable the cameras. According to Quartz and Live Science, the following live cams can be viewed at these sites:

You can also check out the weather app called MeteoEarth, which provides a real-time look at the globe overlaid with tropical storms, wind, cloud cover and more. It also shows social media posts related to the storm and other weather.

Accuweather is updating its Hurricane Irma page with current stats and maps showing the location of the storm and its projected path.

One user, @EUStormMap, posted, "Storm surge from #Irma has had a major effect on the Island of St-Martin, this image taken 55 min ago from inside the eye wall! #TY Chi-Chi"

The NHC is tweeting from @NHC_Atlantic, saying, "Extremely dangerous core of Hurricane #Irma closing in on the Virgin Islands. http://www.hurricanes.gov."

NASA is tweeting from a number of handles, including @NASA_SPoRT, which said, "Saint-Martin and Anguilla appear to have taken a direct hit by cat 5 Hurricane #Irma. #GOES16."

Meteorologist @EricHolthaus is also tweeting and retweeting, saying, "Getting increasingly unrealistic to expect that South Florida will escape a major impact from Hurricane #Irma."