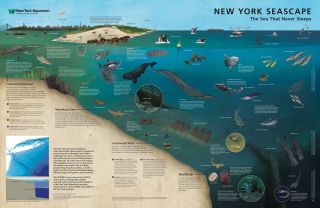 This side of the New York Seascape map shows the amazing diversity of life living near the coast, on the continental shelf and off the shelf break.
(Image: © WCS New York Aquarium/National Geographic)

New York City, it's time to get to know your neighbors.

No, not New Jerseyans. Look the other way — toward the ocean. A new map produced by the New York Aquarium and National Geographic reveals the biodiversity teeming off the city's shores.

The map shows the New York Bight, a 16,000-square-mile (41,440 square kilometers) area of the Atlantic where whales, sharks, sea turtles and squid ply the depths. [Species Success Stories: 10 Animals Back from the Brink]

"The map of the 'New York Seascape' is designed to raise awareness and appreciation of the surprising ecological richness right here in our own backyard," Jon Forrest Dohlin, director of the New York Aquarium, said in a statement. The museum is making copies of the map available first-come, first-serve to visitors starting Thursday, June 8.

The map has two sides; one shows a map view of the coast and seafloor, including the topography of the continental shelf and Hudson Canyon. This submarine canyon has walls two-thirds of a mile (1.2 km) tall and cuts into the continental shelf. The map pinpoints maritime traffic routes, offshore wind farms, whale-watching areas and even shipwreck sites. It also includes sidebar inserts with information about ocean temperatures, ocean-vessel traffic and wildlife migrations.

The other side peers into the ocean as if it were an aquarium, illustrating the marine organisms that live near the coast, on the continental shelf and off the shelf break, where the seafloor plunges into inky blackness. Horseshoe crabs and shorebirds make use of the barrier islands near Manhattan, while fish like striped bass, flounder and menhaden hang out in nearshore waters. The continental shelf is home to brittle stars and sea scallops, while cold-water corals shelter in Hudson Canyon.

Among the rarest denizens of the New York Bight is the North Atlantic right whale (Eubalaena glacialis). There are likely only about 500 of these behemoths (they weigh up to 79 tons, or 72 metric tons) left in the world, according to the National Oceanographic and Atmospheric Administration (NOAA).

"The map highlights the movements of one of the most endangered whales on the planet, the North Atlantic right whale, as it moves through New York's waters," Howard Rosenbaum, the director of the Wildlife Conservation Society's Ocean Giants Program, said in the statement. "Hopefully, this will help draw attention to the needs of this and other species so close to our shores."