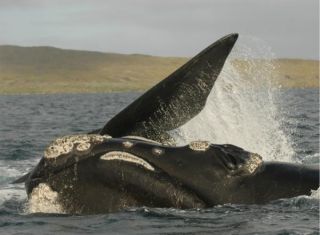 Even before the heyday of whaling in the mid-1800s, whalers knew which whales were the "right" and easiest ones to hunt — three species that float when killed, are fairly slow moving, feed near the surface and live close to shore. Unfortunately, these creatures now face a new, more modern threat — a proposal to use seismic airguns off the U.S. Atlantic coast to search for oil and gas deposits beneath the ocean floor.

Recently, Endangered Species Day marked a time for raising awareness of such amazing creatures and to help bring them back from the brink of extinction.

Right whales have been in trouble for centuries. Their numbers plummeted in the 1700s due to overexploitation by the whaling industry, however the Southern right whale has slowly repopulated its numbers. The North Pacific and North Atlantic species, however, remain critically endangered. In fact, estimates suggest that only approximately 500 North Atlantic right whale individuals left in the world.

Ever since the depletion of the North Atlantic right whale population, these whales have struggled to recover, in part because of how long it takes them to mature and reproduce, and also because of threats they face from human activity. The characteristics that made these whales the "right" ones to hunt are now placing them in the path of other dangers. Though there is a moratorium on commercial whaling, these whales have still faced threats like injuries and fatalities from ship strikes and fishing gear entanglement .

With the new seismic testing proposal, the situation grows even worse. The U.S. Department of the Interior is currently considering opening critical North Atlantic right whale habitat to seismic testing. The tests create sound waves that help geophysicists map the seafloor for oil and gas deposits, the first step on the path to offshore oil drilling in the Atlantic ocean. The sound waves are generated by seismic airguns that blast compressed air at sounds 100,000 times more intense than standing near a jet engine. These blasts can occur every 10 minutes, for days to weeks on end, and may result in temporary or permanent hearing loss for the whales, along with habitat abandonment, disruption of mating and feeding, beaching events and even death.

The planned testing area stretches along the East Coast between Delaware and mid-Florida and coincides with right whales' migration routes. Startlingly, the U.S. Bureau of Ocean Energy Management itself estimates that more than 138,000 marine mammals could be seriously injured or killed by these blasts, including the extremely rare right whales. And if offshore drilling does move into the Atlantic, future oil spills could put these rarest of great whales into even more risk of further depletion.

With offshore drilling no safer than it was four years ago when the BP Deepwater Horizon spill occurred, the United States should not open the Atlantic to seismic testing and future oil drilling, and we definitely do not need to subject these whales to further risks beyond those they already face. The administration of U.S. President Barack Obama should reconsider its plans to allow the use of seismic airguns, and listen to the 14 coastal communities; the more than 150 national, state, and local elected officials; and 160 environmental and welfare organizations who have taken clear stances opposing such seismic testing. We do not need to turn the Atlantic into a blast zone to fulfill our energy needs.