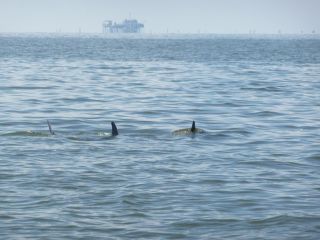 Dolphins swimming in emulsified oil off the coast of Louisiana during the Deepwater Horizon oil spill.
(Image: © NRDC.)

The dolphins in the Gulf of Mexico are sick and dying. Captain Lori DeAngelis told me this last Christmas. She is more commonly known as the Dolphin Queen by the folks in Orange Beach, Ala., because she captains a boat named the Dolphin Queen and is so conversant with the local dolphins that, when she's on the water, she greets them individually by name. And she was right — now, we finally have more scientific evidence as to why.

A study published this week in the journal Environmental Science & Technology compared bottlenose dolphins in Barataria Bay, La., that were oiled by the Deepwater Horizon spill with ones in Sarasota Bay, Fla., that did not come into direct contact with the oil spill and found that the Louisiana dolphins were sicker. Much sicker.

The study is the first to confirm that bottlenose dolphins in the areas heavily affected by the Deepwater Horizon oil spill are suffering injuries that are consistent with exposure to petroleum hydrocarbons. The answer to the Dolphin Queen's mystery of why the dolphins are dying is in the oil. But, she suspected that.

Ever since the oil spill, something has been terribly wrong with the dolphins, DeAngelis warned me. I was on a kayaking trip with a friend in the Gulf of Mexico when we got caught in a hurricane. DeAngelis invited us to wait out the storm at her house, where we ate Christmas ham with her family and listened as she talked about her favorite subject.

For DeAngelis, the local pods are kin. She knows them, has a special noise she calls them with (sounds a bit like "woo woo"), can identify individuals by their fins, can tell you where certain pods like to hang, and doesn't need a scientific study to know when they aren't feeling well.

Yesterday's study was conducted as part of the Natural Resources Damage Assessment (NRDA) by a team of researchers that included government, academic and non-governmental scientists. The scientists found that the Barataria Bay dolphins — the ones that had been directly exposed to oil from the spill — were ill with a variety of heartbreaking symptoms. Nearly half of the Barataria Bay dolphins the researchers sampled were given a "guarded or worse" prognosis, and seventeen percent were expected to die.

Twenty-five percent of the Barataria Bay dolphins were underweight, and they were five times more likely to have moderate to severe lung disease compared to the Sarasota Bay dolphins. This makes sense, as lung disease in humans and other animals, the study explains, has been linked to ingestion of petroleum hydrocarbons.

One Barataria Bay bottlenose dolphin — which had lung disease and was in poor condition generally — was five-months pregnant. When the scientists conducted an ultrasound, there was no heartbeat or movement: it was, in their words, a nonviable fetus.

The Barataria Bay dolphins also had clinicopathologic abnormalities — e.g., inflammation, hypoglycemia, altered iron metabolism and hepatobiliary disease. Almost none of the Sarasota Bay dolphins had any of these abnormalities. The Barataria Bay dolphins also had low concentrations of adrenal hormones. Adrenal hormones are "fight or flight" hormones; they kick in during stressful situations. In humans, extreme or chronic prolonged stress has been linked to adrenal dysfunction, and the scientists explain, if left untreated in humans low adrenal levels (i.e. hypoadrenocorticism) can be life threatening, especially in times of stress or pregnancy.

"[T]he severity of disease, poor body condition, and high prevalence of abnormalities seen in the [Barataria Bay, La.] dolphins is in stark contrast with the overall health status from the ...  reference site, as well as with health conditions previously documented in bottlenose dolphins from other U.S. coastal sites," the scientists grimly conclude.

The die-off is especially devastating because, as the Dolphin Queen will tell you, the Gulf's bottlenose dolphins do not belong to a single, solitary group. Marine scientists divide them into offshore; continental shelf; coastal; and estuary, bay and sound populations, which do not mate with one another and are genetically distinct. The near-coastal population breaks down further into semi-isolated communities, some with fewer than 100 animals. These tiny populations are particularly vulnerable, and the loss of even a small number of individuals could have a devastating impact.

Because these intimate coastal communities are often so small, the Dolphin Queen can greet them by name like family.

This Op-Ed was adapted from "Bottlenose Dolphins Oiled By Deepwater Horizon Spill are Sick and Dying," which appeared on the NRDC blog Switchboard. The views expressed are those of the author and do not necessarily reflect the views of the publisher. This version of the article was originally published on LiveScience.