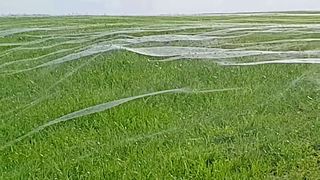 Visitors to a New Zealand park recently found the grass blanketed not by flowers, but by silk webs produced by what appeared to be thousands of tiny spiders.

Park-goer Tracey Maris noticed something unusual about the scene on April 16 and captured video footage of the gently rolling silk waves. The web blanket was approximately 98 feet (30 meters) long and as wide as 7 to 10 feet (2 to 3 m), The New Zealand Herald reported. Webs covered ground near a soccer field at the Gordon Spratt Reserve in suburban Papamoa, near the Bay of Plenty on New Zealand's eastern coast, the newspaper said.

Initially, Maris thought the silk nets were unoccupied, she said. But as she and her family explored the webs' outer perimeter, they noticed that there were "little black things on top" — spiders, numbering in the thousands, Maris told The NZ Herald. "So, as you do, we screamed really loudly," she said. [Weird and Wonderful: 9 Bizarre Spiders]

Maris spotted the webs on a newly made tsunami evacuation mound, she told the news agency Storyful. "There was a bright glistening coming from the top of the mound. It looked almost like the hill was sparkling," Maris said. The elevated mound may have attracted spiders seeking higher ground after recent flooding from Cyclone Cook earlier that week, Maris told Storyful.

It is very likely that the field's silky cover is made of sheet webs, spun by members of the sheet web spider family, Thomas Scheibel, head of the Department for Biomaterials at the University of Bayreuth in Germany, told Live Science in an email.

Scheibel, who studies biomaterials like spider webs, explained that sheet webs are made up of not just one type of spider silk, "but typically several silks with different properties."

New Zealand hosts a variety of sheet web spider species, the largest of which is Cambridgea foliata. While the smallest sheet web spiders measure just a few centimeters across, C. foliata's leg span is "palm-sized," and it produces a web that can measure over 3 feet (1 m) across, according to a species description shared by the Museum of New Zealand Te Papa Tongarewa.

"But it is impossible to tell which spider made the webs in the video," Scheibel told Live Science. "However, it is likely that all webs in the video are made by the same species — although probably several thousands of individuals."

But even the efforts of several thousand spiders can last for only so long. Their work was partly destroyed by a dog that ran across the field shortly after Maris shot her video, and a thunderstorm wiped away what was left; when she returned to the park the next day, no sign of the web remained, Maris told Storyful.

"For me, it was being at the right place at the right time yesterday to see a phenomenon which is rarely seen," she said.