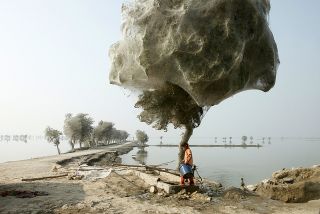 In July, 10 years' worth of rain fell in one week, affecting 20 million people, and leaving behind water that spanned an area the size of England, according to the United Kingdom's Department for International Development, which responded to the crisis. [Image of spider web trees]

Four months later, on Dec. 7, a photographer in the southern province of Sindh captured images of trees cocooned in gauzy webs made by spiders marooned in their branches by the flood waters. Much of the area remained under water as it was taking a long time for the flood water to recede, according to the department.

Residents of the province said they had never seen this phenomenon before, but credited the spiders with reducing the mosquito population, which appeared lower than would normally be expected given the amount of stagnant water left behind by the flood. [Killer Spiders Prefer Malaria Mosquitoes]

All mosquitoes need water to complete their life cycles, so stagnant water left by the floods could have led to lots of the pesky insects hatching.