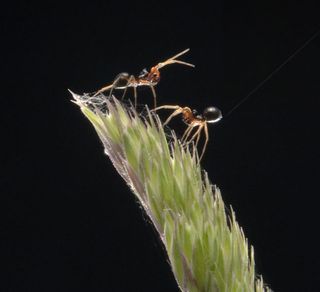 Two male Erigone spiders on a grass seed head. The lower one is in a pre-ballooning posture ready to disperse, known as the "tip-toe" position.
(Image: © Rothamsted Research)

When a spider wants to travel long distances, it simply casts out a strand of silk, captures the breeze and "flies" away. They are known to travel hundreds of miles, even ending up on islands in the middle of the ocean.

Now scientists have figured out how this mode of transportation works. They also discovered that spiders have very little influence where they're flown when caught in a stiff wind.

The new study points out that the 20-year-old model for spider "ballooning"—which assumed that spider silk is rigid and straight and spiders just hang at the bottom—was flawed when applied in moving, turbulent air.

Researchers at Rothamsted Research redesigned the model to allow for elasticity and flexibility in the spider's dragline, its most sturdy line of silk used for moving about and snagging prey. When the dragline is caught in a turbulent breeze, it becomes highly contorted, catching air like an open parachute and sending the spider on an unknown journey.

The spider has virtually no control of where or how far it travels by this means, said Andy Reynolds, a Rothamsted Research scientist. This is how a "ballooning" spider can end up in the ocean hundreds of miles from shore.

In more calm breezes, though, spiders can drift just a few yards to invade new territory or surprise prey.

Although the new model better illustrates how spiders "fly," there is still room for refinement, and the team plans to observe spiders in turbulent airflow inside wind tunnels to improve the model. Better understanding how spiders travel long distances could help scientists control farmland pests.

"Spiders are key predators of insects and can alleviate the need for farmers to spray large quantities of pesticide," Reynolds said. "But they can only perform this function in the ecosystem if they arrive at the right time. With our mathematical model we can start to examine how human activity, such as farming, affects the dispersal of spider populations."

The study is detailed in the July issue of BBSRC Business, the quarterly research highlights of the United Kingdom's Biotechnology and Biological Sciences Research Council.