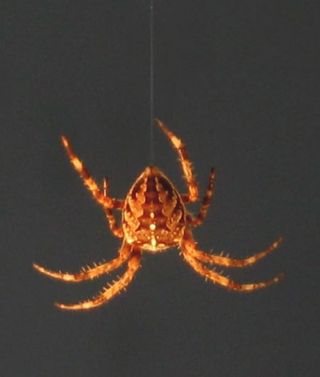 An descending spider can avoid uncontrolled swinging that might attract a predator.
(Image: © Anthony CarrÃ©)

A new study reveals that dragline silk, the stuff spiders use to rappel, has a molecular structure that makes it resilient to twisting.

Researchers attached a small object that weighed about the same as an Araneau diadematus spider to three types of thread and gave it a spin. They twisted the weight though several 90-degree rotations and recorded how long it took for the thread material to return to its original position.

First up, Kevlar thread. Although this stuff is used in bullet-proof vests, it doesn't make for very good spider silk because it does little to dampen the effects of twisting.

Next, researchers tested soft metallic copper thread. Copper dampened the twisting the best as the rod barely oscillated. But the copper became brittle after just a few twist cycles.

Silk drawn from an A. diadematus spider did not dampen twisting as well as copper, but it proved highly resilient. Examination at the microscopic scale revealed that dragline silk's molecular configuration gives it shape "memory," which means it totally recovers its initial form and reduces twisting.

This is good news for spiders, since twisting can lead to swinging, not good when you're trying to sneak up on prey or avoid predators.

"A spider should not swing since a (descending) spider is potentially attractive for predators," study coauthor Olivier Emile of the Universite de Rennes in France told LiveScience.

The study is detailed in the March 30 issue of the journal Nature.