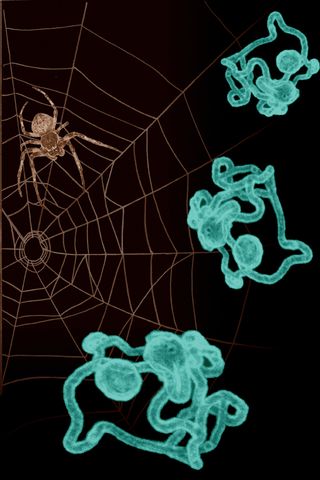 The fibers produced in insect cells, by Gat's team in a lab, are seen at right.

Uri Gat is no Peter Parker. Crime-chasing strands of silk fail to stream from his wrists when he thrusts them at tall buildings. But Gat, a biologist at the Hebrew University in Jerusalem, is as close to a real Spider-Man as they come.

Gat and his colleagues have produced spider web fibers in a lab -- without spiders.

In a feat of genetic engineering that could one day result in tough new industrial materials and commercial products, Gat's team genetically engineered spider web silk. They did it by injecting the silk-making genes of a common garden spider into the cultured cells of a caterpillar.

While much more work is needed to perfect the process, with proper funding the silk could be commercialized within 10 years, Gat told LiveScience.

Spiders, being territorial, are impossible to domesticate. So commercial silk is typically harvested from cocoons of the silk moth. This silk is only one-third as strong and about half as elastic as what spiders produce.

Spider silk is the strongest natural fiber known. The most appealing type is the "dragline" that spiders use to move about and snag prey. Dragline silk -- what Peter Parker employs while swinging through the streets -- is six times stronger than steel and can be stretched to 50 percent of its length before it breaks.

Reproducing dragline silk has been called the Holy Grail of materials science.

In 2002, scientists at Nexia Biotechnologies produced spider silk proteins in cells from a mammal. The proteins were then spun into silky threads.

The Nexia research was supported by the U.S. Army, which is interested in producing dragline silk for better armor, tethers and bulletproof vests. It could also improve surgical threads, microconductors, optical fibers and the clothes on your back, says Gat, whose team moved a step closer to the goal by creating self-assembling spider web fibers.

Dragline silk is made primarily of two proteins, called ADF-3 and ADF-4. These are produced in a gland in the spider's abdomen, using the same amino acids that your body uses to produce skin and hair. ADF-4 allows for the rapid production of fiber, and ADF-3 regulates this production. Each protein is made by a specific gene.

Gat's team put these genes into a genetically engineered virus, then let the virus infect the cultured caterpillar cells. The cells produced silk proteins, and then spider fibers formed spontaneously in the petri dish.

But there's a hitch. The lab fibers included only the ADF-4 protein.

Still, the fibers were identical to real draglines in chemical resistance and diameter -- about one-tenth the width of a human hair. And important aspects of natural silk production are now better understood.

"The research enabled us to determine the close connection that exists between the sequence, structure and functions of the proteins," Gat said.

The results are detailed in the Nov. 23 issue of Current Biology. Scientists at Oxford University and the Technical University of Munich contributed to the research.